With the third strike, Raheem Sterling became the third player to score 100 goals under manager Pep Guardiola. Lionel Messi and Sergio Aguero are the other two to have achieved the feat. 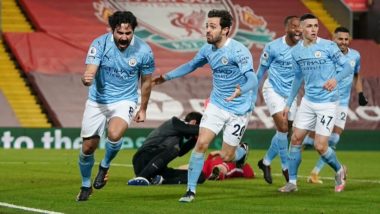 Liverpool, February 8: Liverpool's hopes of winning the Premier League 2020-21 season were severely dented on Sunday as the side suffered a 1-4 defeat at the hands of Manchester City here at the Anfield Stadium. With this loss, Liverpool remains static at the fourth spot in the standings with 42 points from 40 points from 23 matches while City consolidated its position at the top spot.

Liverpool enjoyed the bulk of ball possession in the match, but the side made some costly errors which ended up handing the match on a platter to Manchester City. Manchester City also registered five shots on compared as compared to Liverpool's three.

The first half of the match saw no goals as both teams were trying to outdo each other and at the halfway mark, the scoreline remained 0-0. Premier League: Liverpool title hopes dented after Man City thrashing. However, it was the second half where the whole complexion of the game as City managed to get the lead in the 49th minute as IIkay Gundogan registered the first goal of the match. Gundogan had missed a penalty in the first half, but he corrected his mistake and the visitors were able to take a 1-0 lead.

Mohamed Salah equalised the scoreline for Liverpool in the 63rd minute through a penalty. Ruben Dias had brought down Salah inside the penalty area and as a result, the Reds were awarded a penalty.

However, two back-to-back errors from Liverpool's goalkeeper Alisson Becker helped Manchester City get a 3-1 lead in no time. The second and third goals for City were scored by Gundogan and Raheem Sterling respectively. With the third strike, Raheem Sterling became the third player to score 100 goals under manager Pep Guardiola. Lionel Messi and Sergio Aguero are the other two to have achieved the feat.

The final nail in the coffin came in the 83rd minute as Phil Foden scored the fourth goal for City and this gave the side a 4-1 victory for Liverpool. Liverpool will next lock horns against Leicester City on Saturday while City will square off against Tottenham Hotspur on the same day.