Real Madrid struggled to break down 10-man Atalanta before Ferland Mendy netted an 86th-minute winner to give the Spanish giant a 1-0 win in the first leg of the round of 16. 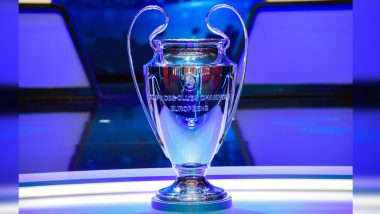 Bergamo (Italy), February 25: Real Madrid struggled to break down 10-man Atalanta before Ferland Mendy netted an 86th-minute winner to give the Spanish giant a 1-0 win in the first leg of the round of 16. Madrid entered the game as the big favorite despite a slew of injuries, and Atlanta's chances diminished further when midfielder Remo Freuler was sent off in the 17th minute after being adjudged to have denied a scoring opportunity.

Madrid — which was missing players including forward Karim Benzema, midfielder Eden Hazard and captain Sergio Ramos — still found it difficult to test Atalanta goalkeeper Pierluigi Gollini until the end of the first half, when he pulled off a great reaction save to keep out Casemiro's header from Toni Kroos' free kick. Lionel Messi Shocks Elche Goalkeeper Edgar Badia By Asking For His Shirt After Barcelona Seal 3-0 Win In La Liga 2021 Match (Watch Video).

Just as it looked as if Atlanta would hold on for a draw, Mendy received the ball outside the area after a corner and curled a shot into the right side of the net from 20 yards.

"Yes, we'd practiced that play, but it wasn't supposed to be Ferland who took the shot," said Madrid coach Zinedine Zidane with a smile.

"We didn't have a great game tonight but what was most important was the result. Scoring away from home was important for us." Lionel Messi’s Brace Leads Barcelona to a 3-0 Win over Elche in La Liga 2021, Watch Goal Highlights.

The second leg will be on March 16 in Madrid. Atlanta can take comfort from the fact it has won all its European matches away from home this season, including a 2-0 victory over Liverpool at Anfield.

"We just have to win in Madrid," Gasperini said. "It's easy — we can't overthink, we just have one possibility. We must win."

Manchester City beat Borussia Mönchengladbach 2-0 in the other round-of-16 match on Wednesday.

Madrid is a 13-time European Cup winner while Atlanta only made its debut in the competition last year, when it surprisingly reached the quarterfinals where it came within a couple of minutes of eliminating Paris Saint-Germain.

The match was played in an empty stadium because of coronavirus restrictions but approximately 5,000 fans were waiting outside the stadium in Bergamo before the game, despite the local health authority urging supporters to stay away. They set off fireworks and flares as they welcomed the team bus.

Atlanta's chances of beating its more illustrious opponent diminished when Freuler was sent off for barging over Mendy on the edge of his own penalty area.

"There's the temptation to remove any form of contact in football and that is suicide for soccer," Gasperini said.

"We can't have referees who have never played football and can't tell the difference between a foul and a challenge. If they don't understand that they should do another job. You don't need to be an engineer at NASA to understand these things. What happened tonight was unbelievable.

Gasperini immediately told midfielder Mario Pašalic to start warming up and a decision on who to take off was made for him on the half hour, with forward Duván Zapata limping after an earlier challenge.

Despite the numerical advantage, Madrid struggled to create goal scoring opportunities until the closing stages of the half when it had a couple of shots deflected off target and Gollini denied Casemiro.

Madrid upped the pressure on Atlanta after the break but again failed to really test Gollini. Only four of its 18 shots were on target. (AP)