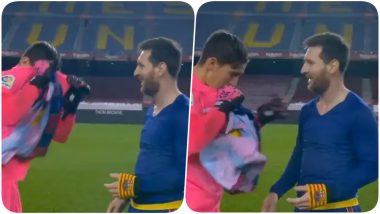 Lionel Messi scored a brace last night at the Camp Nou against Elche in the La Liga 2021. After the final whistle, Messi stunned Elche goalkeeper by asking for his shirt. He looked genuinely shocked as the six-time Ballon d’Or award winner asked for his shirt. The moment he realised that Messi was asking for his shirt, the Elche goalkeeper gave it happily. The video of the incident went viral on social media and the fans hailed Messi for this classy gesture. Lionel Messi’s Brace Leads Barcelona to a 3-0 Win over Elche in La Liga 2021, Watch Goal Highlights.

Talking about the match, Lionel Messi scored a brace at the 48th and 68th minute of the match. Jordi Alba was the one who scored a goal at the 73rd minute and the scoreboard read 3-0. The hosts had possession of 66 per cent and the rest 34 per cent was held by the visiting team. Barcelona took nine shots and out of which five of them ended up being on target.

Now, let's have a look at the video shared by the fans:

Elche goalkeeper Edgar Badia was very surprised when Lionel Messi asked for his jersey in return of his own. Great moment! https://t.co/6TacoPiq3o

(The above story first appeared on LatestLY on Feb 25, 2021 09:28 AM IST. For more news and updates on politics, world, sports, entertainment and lifestyle, log on to our website latestly.com).