Cricket Australia on Monday congratulated cricketing members who have been recognised in the Queen's Birthday 2020 Honours List. 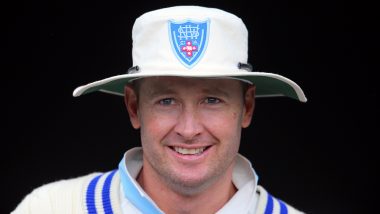 Melbourne, June 8: Cricket Australia on Monday congratulated cricketing members who have been recognised in the Queen's Birthday 2020 Honours List.

Former Australia skipper Michael Clarke has been named an Officer in the General Division of the Order of Australia (AO) "for distinguished service to cricket as a player at the national and international level, through leadership roles, and to the community."

Clarke had represented Australia in 115 Tests and he also led the side in 47 Tests, making him the sixth most-capped skipper in Australian cricketing history.

He is Australia's fourth-highest Test run-scorer and at his peak, Clarke was ranked the best Test batsman in the world.

Clarke famously led Australia to a 5-0 series whitewash over England in the 2013-14 summer to regain the Ashes and also captained Australia to the 2015 World Cup title.

"On behalf of the Australian Cricket family, I congratulate these outstanding women and men who have served Australian cricket from the highest levels through to dedicating their time to developing the game at the grassroots level," Cricket Australia CEO Kevin Roberts said in an official statement.

"This list recognises a group of outstanding Australians who have made a significant contribution to their community in varied roles across playing, coaching, medicine, music, education, local government and volunteering," he added.

Clarke is part of a very small cricketing club, with Wally Hammond and Don Bradman, as the only men to score a triple-century and a double-hundred in the same series. He also won the Allan Border Medal four times.

Lynette Larsen has also been named a Member in the General Division of the Order of Australia (AM) "for significant service to cricket as a player, selector, manager and coach at the elite level."Larsen played 64 matches for Australia from 1984-1992, averaging 41 in Tests and she captained Australia 53 times across Tests and One Day Internationals, which included winning the Women's Cricket World Cup in 1988.

She was also instrumental with the International Women's Cricket Council and was a key driver of the integration of the IWCC with the (men's) International Cricket Council.Cricket Australia also congratulated the Hon. Alan Ferguson and Dr Douglass Lording for being named a Member in the General Division of the Order of Australia (AM)) of the Queen's Birthday 2020 Honours List.

In addition to Clarke, Larsen, The Hon. Alan Ferguson, Rosen and Lording, 10 prominent members of the cricket community received the Medal of the Order of Australia in the General Division (OAM).