Six-time Grand Slam champions and Belgium's first-ever women's tennis' World No 1, Kim Clijsters celebrates her 37th birthday. A tennis legend and one of few select to hold the top rank in both singles and doubles simultaneously, Clijsters returned to the court in February 2020, seven years after calling retirement for the second time. 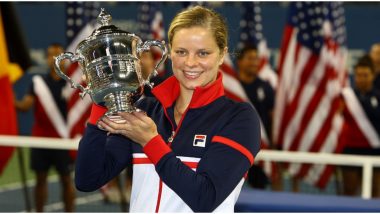 A six-time Grand Slam champion and Belgium’s first World No 1 women’s professional tennis player, Kim Clijsters celebrates her 37th birthday on June 08, 2020 (Monday). Clijsters was among the first advocators for women’s tennis in her country and together with Justine Henin, she marked Belgium’s place in tennis’ esteemed history. Clijsters holds a remarkable record of being among very select few tennis professionals, across all categories, to be ranked the World No 1 in both singles and doubles simultaneously. Kim Clijsters, Four-Time Grand Slam Champion and 'Full-Time Mum' Announces Tennis Comeback in 2020 (Watch Video).

Recurrent Injuries, fatigues and family concerns have forced her to give up the tennis racket twice in her distinguished career but each time, Clijsters has returned with a bang. When the six-time majors’ winner decided to call it a day at the age of 23 in 2007, tennis was left without one of its brightest personalities. But Clijsters returned with three consecutive US Open titles two years later.

She bid adieu once again in 2012 and this it seemed she had nothing more to give after almost 12 years at the top. But earlier this year, Clijsters announced her urge to return to the tennis court again and successfully did it at the Dubai Open in February. As she celebrates her 37th birthday, take a look at some of the most memorable wins of her career.

Both Belgians, both childhood friends and both tennis buddies. Justine Henin and Clijsters were not just competing for a maiden Grand Slam final appearance but also to become the first from Belgium to reach a majors final. Henin clearly was the favourite and in the manner, she raced to an opening set win the final seemed at her destiny. But not only did Clijsters take the match to third and deciding set but also saved three break points to neutralise Henin’s threat and take the game 2,6 – 7-5, 6-3.

A win Kim Clijsters rated among her most satisfactory and best victories. Clijsters entered the final having beaten Henin in the quarters and earned a bye to the summit clash after Venus Williams retired hurt. Serena, on the other, was having a glorious season. She had won the last three Grand Slam tournaments and was on a 56-4 win record for that season. Her record against Clijsters read 5-0. Yet Clijsters won in straight sets beating the mighty American 7-5, 6-3 for her maiden WTA Finals title.

A day after losing the French Open women’s singles final to fellow Belgian Henin, Clijsters bounced with a doubles title to claim her maiden Grand Slam title. The French Open win was consolation for the 20-year-old after two final heart-breaks in the singles at Roland Garros. Clijsters and her partner Ai Sugiyama beat the top-seeded pair of Virginia Ruano Pascual and Paola Suarez 6-7 (5-7), 6-2, 9-7 despite falling back in the opening set and requiring to mount a fightback in the decider.

Maria Sharapova was the new women’s World No 1 and tennis’ new global face. Clijsters survived Venus Williams’ hurricane winning the contest from two-game away from a defeat in the quarter-finals and she faced just the equal fight in Sharapova. Every time the Belgian looked like she had the match, Sharapova will pull a trick out of the hat and keep the game flowing. Finally, after six match points and a deciding third set, Clijsters progressed to the final with a 6-2, 6-7 (4-7), 6-3) win. She would go on win her maiden single Grand Slam title that every week.

Her final Grand Slam title win and surprisingly a first at the Australian Open. After four semi-final and final heartbreak, Kim finally tasted victory in Australia. It was also her first singles Grand Slam trophy outside the US Open. Kim beat Li Na 3-6, 6-3, 6-3 to complete victory in all four major events.

(The above story first appeared on LatestLY on Jun 08, 2020 08:14 AM IST. For more news and updates on politics, world, sports, entertainment and lifestyle, log on to our website latestly.com).