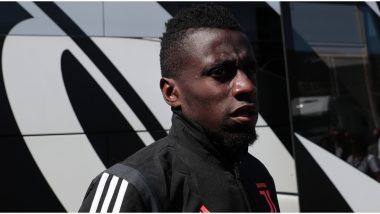 The midfielder joins Inter Miami after leading Juventus FC to the 2019/20 Serie A title and will bring championship-winning experience and a well-rounded skill set to the team's midfield.

Matuidi is a four-time Ligue 1 and three-time Serie A champion. He is also a three-time Coupe de France, four-time Coupe de la Ligue and one-time Coppa Italia and Supercoppa Italiana champion. The midfielder was also named the 2015 French Player of the Year and selected to the Ligue 1 Team of the Year twice. Trae Coyle Transfer News Update: Arsenal Forward Joins Gillingham on Season-long Loan.

Matuidi has represented France from the youth teams through the full national team starting with his senior debut in 2010. Since then, he has made 84 senior appearances for Les Bleus, registering nine goals and 10 assists across all competitions.

"Blaise is one of the most successful midfielders of his generation and we're thrilled to have him at Inter Miami. His world-class quality and leadership will be key attributes for the Club," Paul McDonough, Inter Miami's COO and Sporting Director said in a statement.

The Toulouse-born midfielder appeared at the 2016 UEFA EURO, as well as at the 2014 and 2018 FIFA World Cups. The 33-year-old played in five and started four of the team's seven matches en route to the 2018 title, including the final against Croatia. Matuidi becomes the only active World Cup-winner currently playing in MLS. Cristiano Ronaldo to Barcelona Transfer News Latest Update: Juventus Star Offered to Spanish Club to Reduce Massive Wage Bill.

"I couldn't be happier to welcome my friend Blaise to Inter Miami. He is an exciting and gifted player and a great person. To have a World Cup winner of Blaise's quality in our new team is such a proud moment - for us as owners and for our fans. For me personally, to have a former teammate joining our Club is very special and I can't wait to welcome him and his beautiful family to South Florida," said co-owner David Beckham.