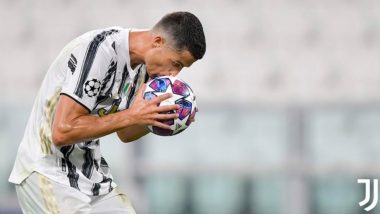 Cristiano Ronaldo’s time at Juventus might be coming to an end as not only the five-time Ballon d’Or is searching for a new club due to teams lack of competitiveness in Europe, the Italian side are also looking to offload the Portuguese star and his massive wage bill. The 35-year-old was the club’s highest scorer this season but wasn’t able to inspire them in the Champions League as they were knocked out by Lyon in the round of 16. Amid PSG Transfer Rumours, Cristiano Ronaldo Shares Picture With Girlfriend Georgina Rodriguez From His Portofino Vacation (See Post).

Juventus are looking for a fresh start after a disappointing season, which saw them win their ninth league title but fall short in domestic and continental cup competitions. As a result, the Bianconeri parted ways with manager Maurizio Sarri and appointed former player Andrea Pirlo as his replacement. And with the record Italian champions looking to rebuild, they are preparing a squad overhaul. Cristiano Ronaldo Transfer News Update: Mexican Third Tier Side Posts Picture of Juventus Star in Their New Kit Amid PSG Links.

Cristiano Ronaldo had a brilliant individual season for the Italians but due to the financial aftereffects of the coronavirus pandemic, Juventus are looking to get rid of the 35-year-old footballer and his mammoth contract. In that attempt, the Bianconeri have offered him to several clubs including Spanish giants Barcelona, as per journalist Guillem Balague.

🗣 'Juventus wants to get rid of his wage, he's been offered everywhere including Barcelona' @GuillemBalague on the future of @Cristiano Ronaldo

Cristiano Ronaldo earns around €23 million a year and in order to reduce that wage bill, Juventus have asked the 35-year-old’s agent Jorge Mendes to find him a new club. Balague also added that Real Madrid have refused to sign the five-time Ballon d’Or back, as he left the club in 2018 for a record transfer fee.

According to certain reports, the 35-year-old wants a move to French champions Paris Saint Germain and his agent will meet with the club's director during the ongoing Champions League tournament in Portugal. However, Juventus director Angelli has insisted that the Portuguese player will be at Juventus next season.

(The above story first appeared on LatestLY on Aug 13, 2020 01:28 PM IST. For more news and updates on politics, world, sports, entertainment and lifestyle, log on to our website latestly.com).