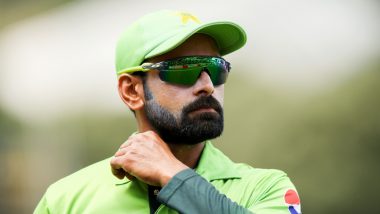 The cricketers are now eligible to join the Pakistan men's national cricket team in Worcestershire for the England series. Also Read | Mike Tyson Quotes With HD Images: 'I Just Want to Conquer People and Their Souls' & More Powerful Sayings by the Boxing Great to Mark His 54th Birthday.

Both England and Pakistan are slated to play three Tests and three T20Is in a bio-secure bubble and the dates for the tour will be announced in due course.

"The players were retested on Monday, 29 June, following a first negative test on 26 June. The PCB will now start making their travel arrangements and the departure details will be shared in due course," the PCB said in an official statement. Also Read | BAR vs ATL Dream11 Prediction in La Liga 2019-20: Tips to Pick Best Team for Barcelona vs Atletico Madrid Football Match.

The PCB had initially planned to send a squad of 29 players to England, but ten players tested positive for coronavirus earlier this week. On Saturday, Wasim Khan, the PCB chief executive, announced that six of those ten players returned negative results when they were tested for the second time.

So, as a result, 20 players and 11 members of the support staff travelled to England on June 28. Pakistan had last played Test cricket in February this year against Bangladesh. They were scheduled to play the second Test later in April, but the match was postponed due to the coronavirus pandemic.