PAK vs ZIM 2020: Shadab Khan to Miss First ODI Against Zimbabwe Due to Stiffness in His Leg 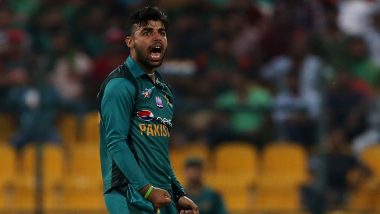 Lahore, October 28: Pakistan vice-captain Shadab Khan will miss the first ODI against Zimbabwe as he suffered from stiffness in his left upper-leg during the warm-up game, the Pakistan Cricket Board's (PCB) medical team confirmed on Wednesday.

"...Shadab Khan will be unavailable for selection for the first One-Day International against Zimbabwe, which will be played at the Pindi Cricket Stadium on Friday, October 30. The leg-spinner suffered from stiffness in his left upper-leg during the first intra-squad warm-up match in Lahore on 23 October," PCB said in a release.

"Shadab will continue to be treated and rehabilitation regime and a further update will be provided ahead of the second ODI," it added. Pakistan, Zimbabwe Players Test Negative for COVID-19 Ahead of ODI, T20I Series.