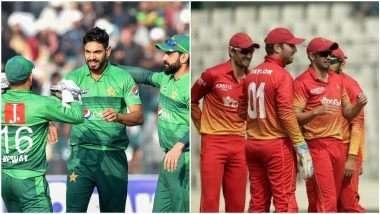 Rawalpindi, October 27: Pakistan Cricket Board (PCB) on Tuesday said that the players and player support personnel of Zimbabwe and Pakistan were tested for coronavirus and all tests returned negative. PCB said a total of 107 Covid-19 tests were conducted which also included match officials.

"A total of 107 Covid-19 tests, conducted on the players and player support personnel of Zimbabwe and Pakistan sides as well as the match officials, have returned negative. The tests were conducted on Monday as part of the PCB's Covid-19 Protocols following the assembling of the two sides in Islamabad," PCB said in a statement. PAK vs ZIM Series 2020: Pakistan Shifts T20Is Against Zimbabwe to Rawalpindi Due to Poor Air Quality in Lahore.

The two sides will train at the Pindi Cricket Stadium today. Pakistan and Zimbabwe will play three ODIs and as many T20Is in Rawalpindi. The three-match series, which is part of the ICC Men's Cricket World Super League, commences on Friday.