Get latest articles and stories on Sports at LatestLY. Captain Chamari Athapaththu slammed an unbeaten 80 to help Sri Lanka register a thumping-seven wicket win over India in the third and final T20I match of the series at the Rangiri Dambulla International Stadium here on Monday. 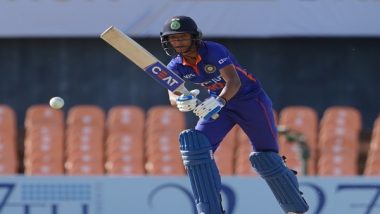 Dambulla [Sri Lanka], June 28 (ANI): After facing a defeat in the third T20I against Sri Lanka, India skipper Harmanpreet Kaur lauded her rivals and said that they deserved to win.

Captain Chamari Athapaththu slammed an unbeaten 80 to help Sri Lanka register a thumping-seven wicket win over India in the third and final T20I match of the series at the Rangiri Dambulla International Stadium here on Monday.

Also Read | India vs Ireland 2nd T20I 2022: Hardik Pandya, Harry Tector and Other Key Players To Watch Out For.

"I think Sri Lanka deserved this win, especially the way they batted. Even after the powerplay, they kept creating pressure on us. We did have partnerships but needed a better strike rate. This score wasn't enough. We need to work on our strike rates a bit. They (crowd) were there and supporting both teams, felt really good. Big thanks to them," said Harmanpreet in a post-match presentation.

Sri Lanka's strong performance came a little late as they have already lost the series 2-1 to India.

Chasing 139, Sri Lanka was not off the most ideal start, losing opener Vishmi Gunaratne for five at the end of the first over with captain Harmanpreet taking a good catch.

Captain Chamari Athapaththu and Harshitha Madavi tried to stabilise the innings and their 31-run partnership was broker by Radha Yadav.

Madavi was out on 13 off 14 balls after Mandhana took a catch at deep mid-wicket.

This brought Nilakshi de Silva to the crease. She along with Athapaththu attacked the Indian bowlers to attack, with the captain looking good in particular. The duo brought up a 50-run stand with a four in the 12th over. On the very next ball, captain Athapaththu slammed medium-pacer Simran Bahadur for another four, bringing up her half-century.

The partnership was broken after Silva was run out for 30 off 28 balls. This also ended the 77-run partnership between her and Athapaththu.

Kavisha Dilhari was the next on the crease. She and her captain took Sri Lanka to the target, finishing at 141/3 in 17 overs, with Chamari Athapaththu remaining unbeaten at 80 and Dilhari on 7.

Renuka Singh was the leading bowler for India with figures of 1/27 in four overs. Radha Yadav also took a wicket. (ANI)