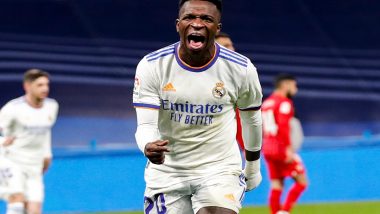 Nyon [Switzerland], May 31 : UEFA on Tuesday named Real Madrid's Vinicius Junior as the 2021/22 Champions League Young Player of the Season. The 21-year-old Brazil winger capped a breakthrough season with the only goal against Liverpool in the Stade de France final, burying Federico Valverde's cross-shot at the far post in the 59th minute. It was his fourth strike of the Champions League campaign, to go with six assists - a figure bettered only by Bruno Fernandes of Manchester United. Mohamed Salah, Liverpool FC's Footballer, Named PFA Fans' Player of the Year.

The bulk of those assists set up goals for 2021/22 UEFA Champions League Player of the Season Karim Benzema, as the duo forged an effective partnership. While Benzema provided power and predatory instincts, Vinicius Junior shone with his pace, quick feet and creative flair, best highlighted by his sensational solo goal in the 5-0 group stage win at Shakhtar Donetsk. "The toughest thing in football is to score," said Madrid coach Carlo Ancelotti after the final in Paris. "You need to take your time, be cold-blooded, and that's what Vinicius has done over the course of this season. Today, he put the cherry on top of a brilliant season," he added.