Liverpool FC's star forward Mohamed Salah has been voted as PFA Fans' Player of the Year for 2021-22. 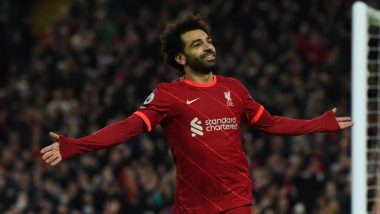 London [UK], May 31 : Liverpool FC's star forward Mohamed Salah has been voted as PFA Fans' Player of the Year for 2021-22. The Egyptian retains the award after football supporters recognised his stellar Premier League campaign for Liverpool. Salah claimed his third Golden Boot, alongside Tottenham Hotspur's Son Heung-min, by netting 23 goals from his 35 outings in the top flight. Isco Alarcon, Marcelo Confirm Departures From Real Madrid.

The No.11 also picked up the league's Playmaker prize for his 13 assists in the season - one more than teammate Trent Alexander-Arnold, who was also shortlisted for the PFA prize. Salah came out on top in a fan poll to claim the accolade for the third time in his career, with Kevin De Bruyne, Phil Foden, Conor Gallagher and Declan Rice the other nominees.