At least 15 people have been killed in an eruption of Mount Nyiragongo volcano in North Kivu of the Democratic Republic of the Congo (DRC). 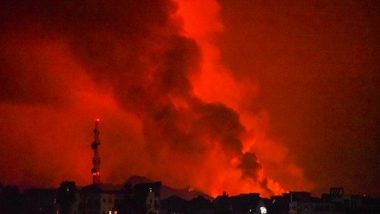 Kinshasa, May 24: At least 15 people have been killed in an eruption of Mount Nyiragongo volcano in North Kivu of the Democratic Republic of the Congo (DRC).

According to the report, nine people were killed in a truck rollover accident while four victims were prisoners trying to break the Munzenze central prison in Goma, the spokesman said, adding that two more people were burned to death on Sunday morning. Iceland's Fagradalsfjall Volcano Erupts After 800 Years! Viral Drone Footage Incredibly Resembles Mordor From 'The Lord of the Rings'.

The DRC authorities have not yet released the assessed collateral damage caused by the eruption. Muyaya urged residents to avoid non-essential activities while seismic activity in the area could still cause damage.

Helicopters of the UN peacekeeping mission in the DRC made constant reconnaissance flights after the eruption over the crater to closely monitor the situation.

According to local authorities, the lava flow came to a stop at around 4 am on Sunday morning on the outskirts of Goma, while local residents started returning to their homes in abandoned neighbourhoods overnight.

The Volcano has erupted for the first time in nearly two decades, sending lava sliding down the hillside.

Thousands of people fled the city of Goma. Nyiragongo's last eruption was in 2002 in which 250 people were killed and 120,000 were left homeless in the DRC.

It is one of the world's most active volcanoes and is considered among the most dangerous.