Christmas 2021: US President Joe Biden to Urge Americans to Get Vaccinated as Winter Season Starts

As coronavirus cases surge in the days before Christmas, President Joe Biden plans to stress in a speech the importance of getting vaccinated to protect from the wave of infections tied to the new omicron variant during the Winter Season ahead of Christmas. 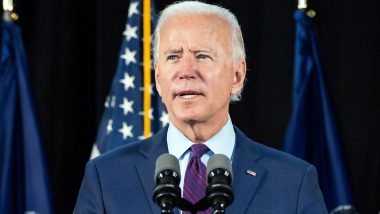 Washington, December 21: As coronavirus cases surge in the days before Christmas, President Joe Biden plans to stress in a speech the importance of getting vaccinated to protect from the wave of infections tied to the new omicron variant.

The world is confronting the prospect of a second straight holiday season with COVID-19 as families and friends begin to gather while the variant quickly spreads. Scientists don't yet know whether omicron causes more serious disease, but they do know that vaccination should offer strong protections against severe illness and death.

In a preview of Biden's speech Tuesday afternoon, White House press secretary Jen Psaki said at Monday's press briefing that the president doesn't plan to impose any lockdowns and will instead be encouraging people to get inoculated — and, if they're eligible, to get their booster shot.

Also Read | Omicron in US: First Death Due to New COVID-19 Variant Omicron, an Unvaccinated Man From Texas.

Biden's top medical adviser, Dr. Anthony Fauci, said over the weekend that Biden will issue “a stark warning of what the winter will look like” for unvaccinated Americans.

Biden has found himself in the delicate position of both alerting the country to the dangers posed by omicron and reassuring Americans that the vaccines will protect them. White House officials are looking to ease the nation back toward accepting the reality of an endemic virus with far lower stakes for the vaccinated. This has meant setting a difficult balance as cases rise and as deaths and serious illness among the unvaccinated dominate headlines.

Underscoring how widespread the virus is, the White House said late Monday that Biden had been in close contact with a staff member who later tested positive for COVID-19. The staffer spent about 30 minutes around the president on Air Force One on Friday on a trip from Orange, South Carolina, to Philadelphia. The staffer, who was fully vaccinated and boosted, tested positive earlier Monday, Psaki said.

Psaki said Biden has tested negative twice since Sunday and will test again on Wednesday. Citing guidance from the Centers for Disease Control and Prevention, Psaki said Biden didn't need to quarantine and would continue with his regular schedule.

There are 40 million eligible but unvaccinated American adults. Efforts to increase vaccination rates have struggled to overcome a series of political, social and cultural divides. Psaki said the president plans to appeal to survival instincts.

“Our health experts assess that you are 14 times more likely to die of COVID if you have not been vaccinated versus vaccinated,” she said Monday.

Leana Wen, the former public health commissioner for Baltimore, said she would like to hear Biden commit in his speech to having enough tests available within three months so that every family can test twice a week. Other countries have already done this, she noted.

“Every family testing twice a week is the goal that we should get to,” Wen said in an interview.

Wen, who teaches public health at George Washington University, said she'd also like to see more restrictions put in place on the still-sizable portion of the public that remains unvaccinated, such as following some cities and requiring proof of vaccination to be admitted to bars, restaurants, concert venues and gyms, for example.

Further complicating Biden's message is uncertainty about the omicron variant.

Scientists say omicron spreads even easier than other coronavirus strains, including delta. It has already become the dominant strain in the U.S., accounting for nearly three-quarters of new infections last week.

Early studies suggest that the vaccinated will need a booster shot for the best chance at preventing an omicron infection but that even without the extra dose, vaccination should still largely protect people from serious sickness or death.

In New York City, nearly 42,600 people citywide tested positive from Wednesday through Saturday — compared to fewer than 35,800 in the entire month of November. The city has never had so many people test positive in such a short period of time since testing became widely available; there's no clear picture of how many people got the virus during the city's first surge in the spring of 2020.

The latest outbreak reflects the global challenges of stopping the pandemic.

“We will have to reserve the possibility of taking further action to protect the public,” Johnson said Monday. “The arguments either way are very, very finely balanced.”

The Dutch government began a tough nationwide lockdown on Sunday to rein in sharply rising infections, but many European leaders have opted for something less.

France and Germany have barred most British travelers from entering, and the government in Paris has banned public concerts and fireworks displays at New Year's celebrations. Ireland imposed an 8 p.m. curfew on pubs and bars and limited attendance at indoor and outdoor events, while Greece will have 10,000 police officers on duty over the holidays to carry out COVID-19 pass checks.

In Spain, the national average of new cases is double what it was a year ago. But authorities in the country with one of Europe's highest vaccination rates are betting primarily on mandatory mask-wearing indoors and the rollout of booster shots, with no further restrictions planned.

Neighboring Portugal is telling most nonessential workers to work from home for a week in January, but the country has no other new measures in the pipeline.

Stock markets in Asia, Europe and the U.S. fell on Monday with the expectation that the infections could weigh on global economic growth and worsen global supply chain challenges. (AP)