China Intends to Have at Least 1,000 Nuclear Warheads by 2030, Warns Pentagon

China is investing in, and expanding, the number of its land-, sea-, and air-based nuclear delivery platforms and constructing the infrastructure necessary to support this major expansion of its nuclear forces, according to Pentagon. 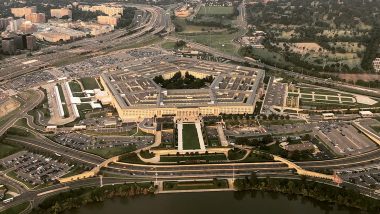 Washington, November 3: A new Pentagon report has revealed that China is rapidly expanding the number of its nuclear delivery platforms and constructing the infrastructure necessary to support its nuclear expansion over the next decade.

A report titled "Military and Security Developments Involving the People's Republic of China (PRC) 2021", said that "the accelerating pace of the PRC's nuclear expansion may enable the PRC to have up to 700 deliverable nuclear warheads by 2027. The PRC likely intends to have at least 1,000 warheads by 2030, exceeding the pace and size the DoD projected in 2020."

China is investing in, and expanding, the number of its land-, sea-, and air-based nuclear delivery platforms and constructing the infrastructure necessary to support this major expansion of its nuclear forces, according to Pentagon. US, UK, Saudi Arabia, UAE Call for Restoration of Government in Sudan.

The report added that China is also supporting this expansion by increasing its capacity to produce and separate plutonium by constructing fast breeder reactors and reprocessing facilities.

China has possibly already established a nascent "nuclear triad" with the development of a nuclear capable air-launched ballistic missile (ALBM) and improvement of its ground and sea-based nuclear capabilities, it added.

New developments in 2020 further suggest that China intends to increase the peacetime readiness of its nuclear forces by moving to a launch-on-warning (LOW) posture with an expanded silo-based force, the report added.

The report comes amid increasing tensions between the US and China over the issue of Taiwan. This report came hours after Chairman of the Joint Chiefs of Staff Mark Milley issued a stark warning about China's military progress, CNN reported.

Echoing General Milley's sentiment, a senior US defence official briefing reporters on the report adopted a similar stance. "The nuclear expansion that the (People's Republic of China) is undertaking is certainly very concerning to us," the official said. "It's one thing to observe what they're doing, but they haven't really explained why they're doing it."