Get latest articles and stories on World at LatestLY.to Europe without the imposition of further American sanctions. 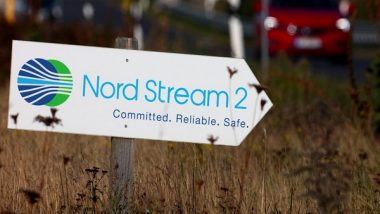 Berlin [Germany], July 22 (ANI): Germany and the United States on Wednesday announced a deal to allow the completion of Nord Stream 2 (NS2) to Europe without the imposition of further American sanctions.

The agreement on Nord Stream 2, announced that Germany and the US commit to countering any future Russian attempt to use the pipeline as a political tool, reported euronews.

In a joint statement, the two governments said they were "united in their determination to hold Russia to account for aggression and malign activities by imposing costs via sanctions and other tools" - referring largely to Russian support for separatists in Ukraine.

There are long-held concerns that Nord Stream 2 could give Russia too much power over European gas supplies, or allow gas to be shut off to Russia's adversaries. But the pipeline is almost completed and has the support of German Chancellor Angela Merkel.

Nord Stream 2 is a gas pipeline that would allow Germany to effectively double the amount of gas it imports from Russia. Nord Stream 2's delivery system is designed to carry up to 55 billion cubic meters (1.942 trillion cubic feet) of gas per year, reported DW News.

Berlin and Moscow agreed on the 1,200-kilometer (746-mile) route, which would connect the Ust-Luga area near Saint Petersburg with Greifswald in northeastern Germany. The pipes would run across the Baltic Sea, for the most part following the route of the pre-existing Nord Stream 1 pipeline, which became operational in 2011.

Meanwhile, the two states also agreed to support Ukraine and Poland, which construe the project as a security threat, by funding alternative energy and development projects, reported euronews.

The joint statement says that "should Russia attempt to use energy as a weapon, or commit further aggressive acts against Ukraine, Germany will take action at the national level and press for effective measures at the European level, including sanctions."

Germany and the US have both committed to supporting a USD 1 billion fund for Ukraine to diversify its energy sources, of which Germany will provide an initial USD 175 million.

In a nod to Poland, Germany has also agreed to sign the 'Three Seas Initiative', an EU and US-promoted scheme that aims to boost energy security among countries bordering the Baltic, Black, and Adriatic seas.

But, the opposition to Nord Stream 2 is still widespread. The deal has already attracted condemnation from Ukraine and Poland. In a joint statement issued on Wednesday night, the countries' two foreign ministers, Dmytro Kuleba and Zbigniew Rau called the deal struck "insufficient".

"The decision to build Nord Stream 2 made in 2015 mere months after Russia's invasion and illegal annexation of Ukrainian territory, created a security, credibility and political crisis in Europe," they said. "Currently, this crisis is significantly deepened by the resignation from attempts to stop the launch of the NS2 gas pipeline.

"Unfortunately, the proposals to cover the resulting security deficit cannot be considered sufficient to limit the threats created by NS2. We call on the United States and Germany to adequately address the security crisis in our region, that Russia is the only beneficiary to. Ukraine and Poland will work together with their and partners to oppose NS2 until solutions are developed."

Earlier, Nord Stream 2 has drawn criticism from the US since it was planned in 2015, where it is believed that the project would increase Europe's dependence on Russia for natural gas, thus strengthening its President Vladimir Putin.

Both parties of US - Democratic and Republican believe that it will increase Europe's dependence on Russia as EU countries already rely on Russia for 40 per cent of their gas needs.

Moreover, with Russia having means to directly deliver gas to its most important buyer, Germany, it would be much easier for the Russian government to shut off existing pipelines leading through Eastern Europe, reported DW News.

Meanwhile, Ukraine is irked due to the Crimean conflict with Russia in 2014 and an already existing pipeline between the two nations. Ukraine feels that once NS2 is completed, Moscow could bypass the Ukrainian pipeline resulting in economic loss for Kiev, reported DW News.

The planned route bypasses central and eastern European countries such as Slovakia and Poland, leaving them without a chance to collect lucrative gas transit fees. (ANI)