Estahban Governor, Yousef Kargar said that the heavy rains on Friday in the county had led to the flooding situation, according to state news agency IRNA. The videos posted on local and social media showed the cars caught in the rising waters and carried away while parents tried to rescue their children from the vehicles. 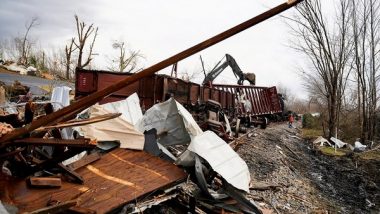 Tehran, July 31: As many as 53 people have been killed in the recent flash floods that wreaked havoc across Iran following heavy rainfall. Mehdi Vallipour, head of the Relief and Rescue Organization of the Iranian Red Crescent Society, told the semi-official Fars News Agency that 16 people were still missing and 3000 people have been provided with emergency accommodation, Xinhua reported.

Vallipour further said that another 1300 people were transferred to safe places. He further said that the rescue operations are being carried out by 687 rescue teams comprising 3,000 rescuers. Meanwhile, Iranian President Ebrahim Raisi on Friday ordered the ministers, heads of organizations and governors-general across the country to mobilize all their facilities to manage the possible floods, according to the presidential website.

"It is necessary for the governors-general to provide relief to the flooded areas in their provinces or to certain neighbouring provinces with all available facilities," he said as quoted by Xinhua. Last Saturday, Al Jazeera reported that at least 22 people were dead and one went missing in the flash floods in Southern Iran. Earthquake in Nepal: Quake of Magnitude 6.0 Jolts Khotang District.

The officials of the local Red Crescent Society Aid group on Saturday confirmed the deaths and further said that 150 emergency responders along with an aerial unit working at the town of Estahban, 174km (108 miles) east of the provincial capital, Shiraz.

Estahban Governor, Yousef Kargar said that the heavy rains on Friday in the county had led to the flooding situation, according to state news agency IRNA.

The videos posted on local and social media showed the cars caught in the rising waters and carried away while parents tried to rescue their children from the vehicles.

The floods happened on a summer weekend in Iran, when families tend to head to cooler areas such as riversides, lakesides and valleys. According to Al Jazeera, Iran has endured repeated droughts over the past decade, but contrary, the country has also faced floods in the region. This phenomenon is made worse when torrential rain falls on sun-baked earth.

Photos released by Iran's Red Crescent showed rescuers walking on cracked dry soil while others worked among reeds. Scientists said that climate change amplifies extreme weather, including droughts as well as the potential for the increased intensity of rain storms.

Earlier, in 2019, 76 people were found dead in Southern Iran and causing damage estimated at more than USD 2 billion. In January, two people were initially reported killed in flash flooding in Fars province when heavy rains hit the area, but the toll rose to at least eight there and elsewhere in Iran's south. Demonstrations have occurred against the drying up of rivers, particularly in central and southwestern Iran.