US: Six Indians Apprehended on Sinking Boat in Failed Smuggling Attempt To Enter America From Canada

Six Indian nationals, aged 19-21 years, were arrested by the US border authorities after they were apprehended on a sinking boat during a failed attempt to be smuggled into America from Canada. 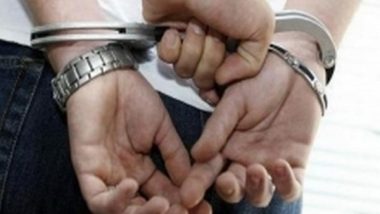 New York, May 6: Six Indian nationals, aged 19-21 years, were arrested by the US border authorities after they were apprehended on a sinking boat during a failed attempt to be smuggled into America from Canada.

Six of the subjects, all ranging from ages 19 to 21 years old, are citizens of India and have been charged with Improper Entry by Alien in violation of US law. The seventh subject, a United States citizen, was charged with Alien Smuggling, which is a felony and carries a penalty of a fine and up to 10 years in prison for each violation.

Last week, suspicious activity was reported to the Akwesasne Mohawk Police Service, which notified the Saint Regis Mohawk Tribal Police Department about a boat containing multiple individuals travelling from Canada near Ontario toward the United States.

The Saint Regis Mohawk Tribal Police Department responded and observed the vessel taking on water and sinking in the Saint Regis River in Akwesasne. Answering the call for assistance, Border Patrol agents and the HAVFD arrived on the scene to find the reported vessel almost entirely underwater.

One of the subjects had managed to exit the sinking boat and made his way to the shoreline. The HAVFD deployed a boat and was able to recover the other six “distressed subjects”. Authorities said there were no life jackets or other safety equipment onboard the sinking boat.

Due to the water temperature being just above freezing, all seven individuals on the boat were evaluated and treated for hypothermia by medical professionals. Upon their release, they were arrested by Border Patrol agents and transported to the Border Patrol Station for processing.

Chief of Police Matthew Rourke of the Saint Regis Mohawk Tribal Police Department cooperation between law enforcement and rescue services prevented what could have been a "horrific tragedy".

“I emphasise that human smuggling is illegal and poses a significant danger to the Akwesasne community. We don't know the intentions or vaccination status of smuggled individuals, but more importantly, the time and resources spent in a rescue effort unnecessarily risk the lives of our first responders and our already strained emergency response services,” he said.

Cautioning that the situation could have been “catastrophic”, Massena Station's Patrol Agent in Charge Wade Laughman said “human smuggling is not only a crime but extremely dangerous. Smugglers do not care about safety or human life; they only care about profits."

The Swanton Sector is responsible for securing the land border between ports of entry in Vermont, New Hampshire and northeastern New York. In January this year a family of four Indians - Jagdish Baldevbhai Patel, 39, Vaishaliben Patel, 37, Vihangi Patel, 11 and Dharmik Patel, 3 - were found dead near Emerson, Manitoba, approximately 12 metres from the Canada/US border.

The family was attempting to cross over into the US on foot from Canada. Seven other Indian nationals, who had entered the US illegally around the same time when the Patel family was found dead, were arrested near the US/Canada border.