World News | We Are Discussing Sixth Package of Sanctions Against Russia: EU Ambassador to India

Get latest articles and stories on World at LatestLY. European Union ambassador to India, Ugo Astuto, said the bloc is discussing imposing the sixth package of sanctions against Russia and want the withdrawal of troops from Ukraine. 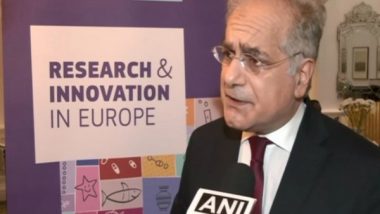 New Delhi [India], May 13 (ANI): European Union ambassador to India, Ugo Astuto, said the bloc is discussing imposing the sixth package of sanctions against Russia and want the withdrawal of troops from Ukraine.

"We have launched five packages of sanctions. We are discussing the sixth one. These sanctions are unprecedented. it's extremely significant that they cover a wide range of topics and that there are financial sanctions, there is a listing of personalities responsible for aggression. We have a ban on aircraft from Russia on shipping, and we are exploring other options," Astuto told ANI adding that the "purpose is clear to stop the war hostilities and Russia to withdraw its troops."

He called Russian action in Ukraine "unprovoked and unjustified aggression" against a peaceful neighbour.

Elaborating on the purpose of sanctions, EU Ambassador said the 27-member-bloc wants to affect the military capabilities of Russia, from the punitive measures.

"What the European Union is doing, is to implement sanctions and isolate Russian leadership. Through the sanctions, we want to affect the military capabilities of Russia. We want to have an impact on the capacity of Russia to continue its military operation in Ukraine. And then we want to make those responsible for this decision accountable and so that is the purpose of these sanctions," he said.

Earlier in the month, EU foreign policy chief Josep Borrell said that European Union is working on the next package of anti-Russia sanctions that aims to "de-swift' more banks and target imports of Russian oil.

"Russia's unprovoked war against Ukraine affects global security. We are working on the 6th package of sanctions which aims to de-swift more banks, list disinformation actors and tackle oil imports. These measures will be presented to the Council for approval," Borrell tweeted.

Last month, the European Council, in its fifth package of economic and individual sanctions against Russia, had agreed on package including a series of measures intended to reinforce pressure on the Russian government and economy.

The package comprised a prohibition to purchase, import or transfer coal and other solid fossil fuels into the EU. It also included further export bans, targeting jet fuel and other goods such as quantum computers and advanced semiconductors. (ANI)