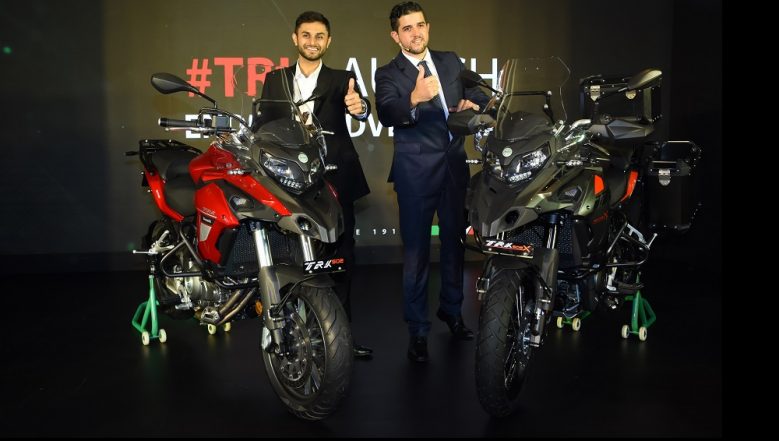 The bike comes in three exciting shades - Red, White and Graphite Grey. Dimensionally, the motorcycle measures 2200 mm in length, 1450 mm in height and 915 mm in width. Carrying a semi-faired design, the motorcycle gets traditional ADV styling elements such as Beak-like fender at the front, large windscreen, knuckle guard on the handlebar and much more. Moreover, the bike is fitted with dual headlamps with LED indicator and LED tail light. The standard version - TRK 502 gets a seat height of 800 mm whereas TRK 502X features raised up seat of 840 mm. The ground clearance of TRK 502 X has been increased by 30 mm (220 mm) than the regular TRK 502, which stands at 190 mm.

We are proud to announce the launch of Benelli TRK502 & 502X in India. Check out exclusive pictures of the #TRKLaunch Event pic.twitter.com/UbrjNfs3Zx

Mechanically, both the motorcycles are powered by the same 500cc parallel twin, liquid cooled unit. The engine is capable of making 47 bhp of maximum power @ 8500 rpm with peak torque of 46 Nm @ 6000 rpm. Transmission duties are carried out by a 6-speed gearbox and it uses a hydraulically actuated clutch for reducing the lever effort. For suspension, the bike gets USD forks upfront whereas the rear sees a monoshock setup. The braking duties on the bike are performed by dual disc brake at both the ends with dual channel ABS as standard.