Drife Is Receiving Phenomenal Response in Market Even Before Launch

The response to Drife in the market has been phenomenal as everyone is really excited about its launch. The blockchain-based ride service has been received incredibly well. There are already franchisee prospects in Brazil, Germany, France, and more. 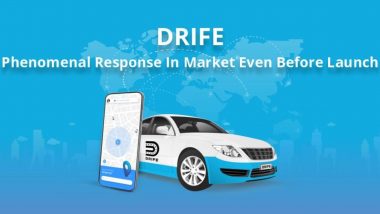 The blockchain-based cab service Drife is all set to create history as it gets launched on August 6. And we say that because the IDO is 30x oversubscribed already.

The response to Drife in the market has been phenomenal as everyone is really excited about its launch. The blockchain-based ride service has been received incredibly well. There are already franchisee prospects in Brazil, Germany, France, and more.

Firdosh, the Founder & CEO of Drife, is currently in Dubai working on getting it greenlit. DRIFE is unique in how it has generated buzz in the tech space, the mobility space, and the blockchain space. Crypto and blockchain fans love the fact that soon, they will be able to use a blockchain-based service that will be a part of their everyday lives.

Notably, Drife isn’t just an excellent service; it’s a conversation starter, an innovation inspiration, and an arbiter for change. Interestingly, Firdosh got the idea to create a system like this once during a late-night Uber ride. As she got into a heartfelt conversation with the driver, he shared his struggle to make ends meet while driving long hours and facing increasing commission rates imposed by the Uber platform. This was when she decided that she has to bring the change.

The former Microsoft Financial Analyst dropped everything to take the broken ride-hailing industry head-on. What she found was even more shocking than she thought. In a recent MIT study, statistics showed that almost 75% of Uber and Lyft drivers were working under minimum wage, exposing a much greater problem that only an innovative platform like DRIFE could solve.

But it was not an easy ride for the team of Drife. They faced several challenges, especially because of the ongoing pandemic situation. Just when they were fully prepared to make their pilot deployment in Bangalore, the pandemic hit, and everything immediately became uncertain. Dates were pushed back, some operations were frozen, and there was no end in sight. But despite all the doubts and low time, they stayed strong and stayed together as a family. Even during the dark phase, they recognised the impact the Drife can make in the world, and it helped them grow stronger.

The core values of Drife revolve around serving the greater good, and hence they never planned to quit and supported the teammates when they needed them the most. Once things get closer to normal, Drife will be moving the people around safely, efficiently, and in a very sustainable way.

Drife’s pilot is set to launch in Bangalore, India, in 2021, assuming progress with the pandemic moves in the right direction.