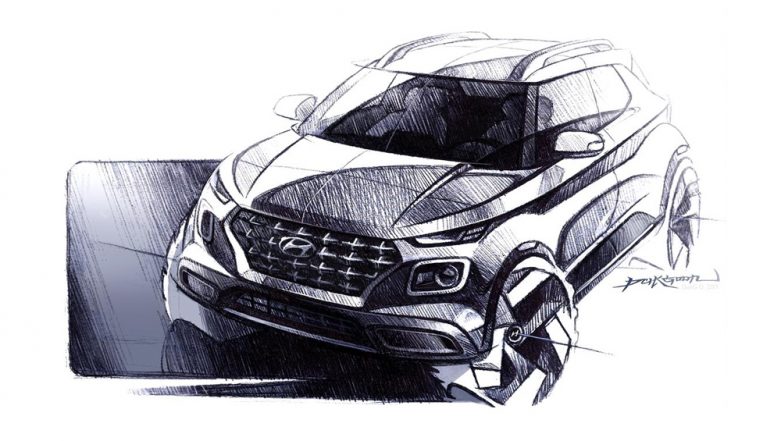 Hyundai Venue, which is Korean automaker's first ever sub-4m SUV is all set to make its global debut today at New York Auto Show. The SUV will also be making its India debut at an event today itself. The car maker will be broadcasting the entire event straight from the venue from the auto show. Moreover, 2020 Hyundai Sonata will also be unveiled at the motor show. The event will kick-off around 8PM IST which will be live streamed on official YouTube channel and Facebook profile. 2019 Hyundai Venue Sub-compact SUV To Be Unveiled Today; India Launch, Expected Price, Bookings, Features & Specifications.

We already know that the South Korean car maker will be launching the much awaited Venue SUV in India by next month. Some market reports claim that the sub-4m SUV will be launched in the country on May 21, 2019. A new image of the forthcoming Venue SUV was leaked online by a Twitter user at Times Square, New York. Dubbed as India's first connected car, the Hyundai Venue is advertised as an 'urban adventurer'. 2019 Hyundai Venue Sub-Compact SUV Design Sketches Officially Released; Scheduled To Make India Debut on April 17

A new small SUV is about to make big news. See the reveal of the first-ever #HyundaiVenue live on Twitter at 10:45 am EDT on 4/17. #NYIAS pic.twitter.com/FbM88aLymq

Under the hood, the new Hyundai Venue SUV will be offered in petrol as well as diesel engine options. The petrol engines could be 1.4-litre and 1.0-litre turbocharged units whereas the oil burner is likely to be 1.4-litre diesel engine. The petrol and diesel engines will be coupled with a 6-speed gearbox as standard along with optional automatic transmission. It is also expected that the company might offer 1.0-litre turbocharged engine with DCT (dual-clutch automatic transmission). Hyundai Venue Aka Hyundai QXi Sub-Compact SUV: Expected Price, India Launch, Features & Engine Specifications - What We Know So Far