Ola Electric, Okinawa & Others Asked To Show Cause Notices by Centre After EV Fire Incidents

Alarmed at the unabated EV fire incidents, the Centre has now sent show cause notices to EV manufacturers like Ola Electric, Okinawa Autotech and Pure EV, among others. 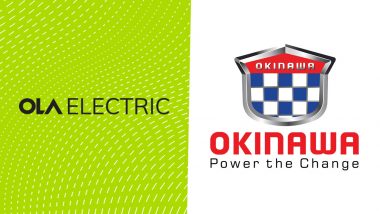 New Delhi: Alarmed at the unabated EV fire incidents, the Centre has now sent show cause notices to EV manufacturers like Ola Electric, Okinawa Autotech and Pure EV, among others, warning them why a penal action should not be taken against them for delivering faulty electric two-wheelers to the public. Reliable sources said that the EV makers have been given time till July end to respond in detail to the notices. Tata Nexon EV Catches Fire in Mumbai, Automaker Says Detailed Investigation On.

Once the responses are in, the government will decide which penal action is to be taken, if any, against the EV makers at fault. Last month, the Central Consumer Protection Authority (CCPA), which comes under the Union Consumer Affairs Ministry, sent notices to Pure EV and Boom Motors after their e-scooters exploded in April.

The Ministry of Road Transport and Highways is also awaiting responses from EV makers on show cause notices sent to them. The preliminary findings from the government-constituted probe committee on EV fires also identified issues with battery cells or design in nearly all of the electric two-wheeler fire incidents in the country.

The experts found defects in battery cells as well as battery design in nearly all EV fires. The Defence Research and Development Organisation (DRDO), which was earlier tasked with investigating electric two-wheeler fire incidents by the Road Transport and Highways Ministry, also found serious defects in the EV two-wheeler batteries.

The Bureau of Indian Standards (BIS) has now issued new performance standards for lithium-ion batteries to safeguard the consumers amid the rising EV fire episodes in the country. Union Minister for Road Transport Nitin Gadkari has already warned EV makers of strict action if they are found negligent.

"If any company is found negligent in their processes, a heavy penalty will be imposed and a recall of all defective vehicles will also be ordered," he had tweeted.

(The above story first appeared on LatestLY on Jul 05, 2022 12:07 PM IST. For more news and updates on politics, world, sports, entertainment and lifestyle, log on to our website latestly.com).