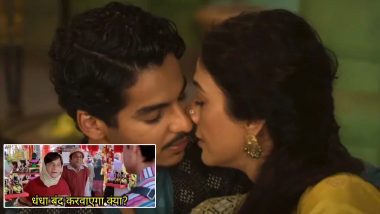 Mira Nair's much-awaited trailer of A Suitable Boy made its way to the internet on Saturday, July 11. The six-part series is adapted from Vikram Seth's novel of the same name and stars a brilliant cast of talented actors. As soon as the video dropped online it instantly grabbed a spot as the top trends on Twitter. However, while a certain section of people lauded the filmmaker's attempt to showcase India post Independence, on the other hand, a section of Twitterverse slammed it for being another product of nepotism. That's not it as the chemistry between Tabu and Ishaan Khatter also were churned many funny memes. A Suitable Boy Trailer: Ishaan Khatter and Tabu Stun Beyond Words in This BBC One Adaptation of Vikram Seth’s Bestseller (Watch Video).

The trailer showcases the lives of a university student, Lata whose mother is keen on getting her married and finding a suitable boy for her. It also gives us a glimpse into the sizzling romance between Maan Kapoor (Ishaan Khatter) and courtesan Saeeda Bai's (Tabu).  Moreover, it's the kiss between Maan and Saeeda which is been heavily trolled. Check out Twitter reactions on the trailer below: A Suitable Boy: Tabu Was Easy to Romance on Screen, Says Ishaan Khatter.

After seeing #Tabu & #IshaanKhatter kissing each other in #ASuitableBoy trailer.

After seeing #Tabu & #IshaanKhatter kissing each other in #ASuitableBoy trailer.

Actress of Suitable Boy to the Director : pic.twitter.com/3Uu3n2AYTm

Well, clearly A Suitable Boy is a butt of jokes online and the meme creators are in no mood to calm down. Meanwhile, the series is penned by Andrew Davies and is slated to hit BBC One on July 26. Apart from Ishaan and Tabu, it will also see Ram Kapoor, debutante Tanya Maniktala, Rasika Dugal in key roles. Stay tuned!

(The above story first appeared on LatestLY on Jul 11, 2020 08:02 PM IST. For more news and updates on politics, world, sports, entertainment and lifestyle, log on to our website latestly.com).