Black Is King Teaser: Beyonce Drops a Glimpse Of Her Upcoming Visual Album Set to Release on Disney Plus (Watch Video) 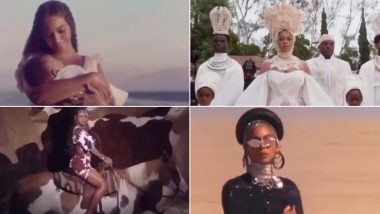 Beyonce just dropped a special treat for her fans on Saturday as she unveiled the teaser for upcoming Disney Plus movie, Black Is King. The film has been produced, created and written by Queen Bey and from the teaser, it looks like it going to be one powerful video. Inspired by Lion King, the film will be streaming next month. It will drop just after the one-year anniversary of the release of Disney’s The Lion King reboot, in which she voiced Nala. The teaser was launched on her website.  Beyonce to Be Honoured with Humantarian Award at 2020 BET Awards.

Whilst announcing the visual album, Parkwood Entertainment gave a statement saying, "‘Black Is King’ is a celebratory memoir for the world on the Black experience. The film is a story for the ages that informs and rebuilds the present. A reunion of cultures and shared generational beliefs. A story of how the people left most broken have an extraordinary gift and a purposeful future." The teaser certainly looks interesting and we can't wait to see more of it. Beyonce Calls Out The Sexism and Patriarchy Prevalent in The Entertainment Business.

The visual album is all set to stream on Disney Plus on July 31. Black is King is based on Beyonce's 2019 album The Lion King: The Gift. It features guest appearances from Childish Gambino, Kendrick Lamar, Pharrell among others and also African artists Wizkid, Shatta Wale, Burna Boy and more.

(The above story first appeared on LatestLY on Jun 28, 2020 02:14 PM IST. For more news and updates on politics, world, sports, entertainment and lifestyle, log on to our website latestly.com).