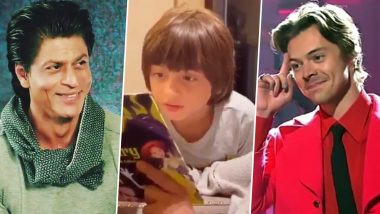 It was yesterday (May 27) when Shah Rukh Khan's youngest son, AbRam celebrated his birthday. However, what fans missed the most was a photo or video from the Khan family highlighting the birthday celebrations at Mannat. Even though fans did not get that treat, they made sure to wish SRK's son and so trended ‘Happy Birthday AbRam' on social media. Now, we all know Shah Ruk Khan and fam are generous and so it's Gauri Khan who decided to share a glimpse from AbRam's birthday and must it's 'scary' and how. Well, don't get puzzled as it's not what you think. Read on. Gauri Khan Shares an Adorable Fan Video Of Shah Rukh Khan and AbRam's I For India Performance Remixed to the Main Hoon Na Theme.

Gauri took to her social media and shared a cutesy video which saw papa Shah Rukh reading birthday boy's favourite book to him namely a 'scary' story. Not just this, as mentioned by Gauri, the clip also featured the favourite song of AbRam which is 'Watermelon Sugar' by Harry Styles. "Listening to ‘scary’ stories. Birthday celebrations with his favourite book, his favourite song and his favourite person...," the post's caption read. Looks like the little one's lockdown birthday was all about his fav song, book along with SRK. What a trio!! Shah Rukh Khan Gives a Singing Performance During The 'I For India' Concert and It is Both Hilarious and Entertaining (Watch Video).

Check Out AbRam's and Shah Rukh Khan's Video Below:

As soon as the above video was shared, many belated birthday wishes for AbRam started pouring in. Meanwhile, Shah Rukh recently made his presence felt in a fundraiser called I For India wherein we also saw AbRam making a guest appearance. And must say, the father-son jodi rocked it and how. Stay tuned!

(The above story first appeared on LatestLY on May 28, 2020 04:30 PM IST. For more news and updates on politics, world, sports, entertainment and lifestyle, log on to our website latestly.com).