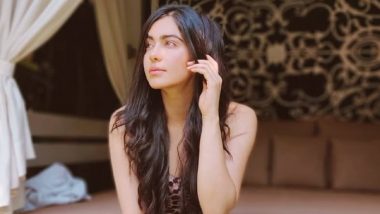 She made her debut with the horror film "1920" in 2008. She was then seen in the popular action franchise "Commando" and will next be seen playing a man in the upcoming "Man To Man". Actress Adah Sharma says she likes to take risks. "'1920' was my first film and it was quite risky for me to play this possessed girl. The audience was going to see me for the first time and they were going to see me with black teeth and messy hair, and I am screaming in a possessed voice. I like taking risks like that," Adah told IANS. Adah Sharma Shares an Important Message While Feeding Homeless Cats in the Times of COIVD-19 (Watch Video)

She added: "When we did 'Commando 2', it was a risk because you have not seen a leading lady who makes jokes and speaks in an accent -- Hindi with a Telugu accent. So, that was another risk and it really work. Even in 'Commando 3', they continued me as Bhavna Reddy (her character in 'Commando 2'). I am very fortunate to be a girl and in an action franchise, one of the biggest action franchises in India." Adah said she had a lot of action to do in the film and was not just a "damsel in distress". Adah Sharma on Life After COVID-19 Pandemic: Hope We Come Out As Grateful, Kinder People Conscious About the Environment

"To be repeated in a film and an action franchise, to have a lot of stuff to do -- I am not a damsel in distress. I am actually fighting battles and doing all the stunts. So, that was really nice. Again, 'Man to Man' will be something different," she told IANS. "Man To Man" revolves around actor Naveen Kasturia's character falling in love with and marrying Sharma's character, only to realise she was biologically a man who became a woman after surgery.

(The above story first appeared on LatestLY on Jun 20, 2020 11:55 AM IST. For more news and updates on politics, world, sports, entertainment and lifestyle, log on to our website latestly.com).