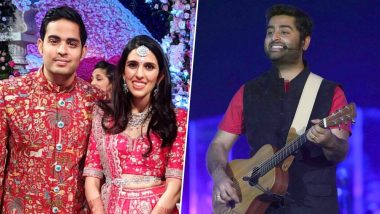 Akash Ambani and Shloka Mehta’s royal wedding has grabbed eyeballs undoubtedly. Be it the décor or the fancy setup, the grand entry of the couple, or the star-studded performances of international celebs, the Ambanis and Mehtas have left the nation amazed for the show they’ve put up. The three-day affair was all about glitz and glam and personalities from across the countries and from various fields were seen in attendance for the wedding. Akash Ambani and Wife Shloka Mehta’s Romantic Dance With Maroon 5’s Adam Levine Taking the Center Stage Will Leave You Awe-Struck– Watch Video.

When Akash Ambani and Shloka Mehta’s pre-wedding festivities was hosted in Switzerland, all were waiting to know what would happen for the wedding. Video of Coldplay’s Chris Martin performing at the Swiss function took the internet by storm. Then Maroon 5’s Adam Levine took the guests by surprise with his performance for the newlyweds post-wedding celebrations. Yesterday (March 11) a reception was hosted for their business associates and this time it was Bollywood’s favourite singer Arijit Singh who stole the limelight. Rajinikanth, Soundarya and Vishagan Make a Terrific Trio at the Akash Ambani – Shloka Mehta’s Wedding Celebration! See Pic.

The wedding reception of Akash Ambani and Shloka Mehta was a star-studded affair. It could be declared as the most beautiful wedding of the year as well. Now we just can’t wait to know when the wedding bells would ring for Anant Ambani and Radhika Merchant.

(The above story first appeared on LatestLY on Mar 12, 2019 09:19 AM IST. For more news and updates on politics, world, sports, entertainment and lifestyle, log on to our website latestly.com).