Watch Akash Ambani and Shloka Mehta doing a slow-dance as Adam Levine croons to some of his popular songs. 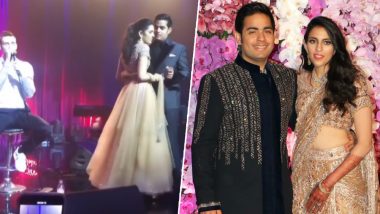 Akash Ambani and Shloka Mehta’s wedding was indeed a royal affair. Be it the pre-wedding festivities or the wedding ceremony, the event saw the who’s who from various fields. Pictures from the event flooded the internet and social media buffs have been going about it. The latest videos which has grabbed the attention is none other than Maroon 5’s Adam Levine crooning at the newly-weds post-wedding celebration. Akash and his wife Shloka’s romantic dance with Adam taking the center stage will leave you awestruck. Kiara Advani, Karan Johar, Karisma Kapoor, Pooja Hegde - Meet The Celebrities Who Did Not Impress Us With Their Style At Akash Ambani And Shloka Mehta's Wedding Reception.

Maroon 5 is a popular pop rock band and Adam Levine was a huge surprise for everyone who attended Akash Ambani and Shloka Mehta’s wedding. Mukesh Ambani never ceases to surprise us. Last time, Beyonce performed at his daughter Isha Ambani's pre-wedding celebration, then Coldplay’s Chris Martin performed at Akash-Shloka’s pre-wedding event and now it was Maroon 5’s Adam Levine who took everyone by surprise at the couple’s post-wedding celebration. Adam crooned to some of the popular tracks and we saw how adorably the husband-and-wife duo danced to the songs. And yes, we cannot miss out on them lip-syncing. Akash Ambani-Shloka Mehta Reception: Varun Dhawan Has an EPIC Reaction to Girlfriend Natasha Dalal Attending the Bash With His Parents.

Today (March 11) a grand wedding reception of Akash Ambani and Shloka Mehta will take place at the Jio World Centre. Once again we’ll see many stars across fields attending the gala event. Let’s wait and watch what else is in store for us for the reception.

(The above story first appeared on LatestLY on Mar 11, 2019 09:48 AM IST. For more news and updates on politics, world, sports, entertainment and lifestyle, log on to our website latestly.com).