Akshay Kumar's Laxmii Bomb Is Now Laxmii! 5 Other Bollywood Movies That Changed Titles Before Their Release Thanks to Controversies

Here we have rounded up some of the prominent Hindi films where the makers opted for a revamp in their movie's title due to some or the other controversies. Check it out. 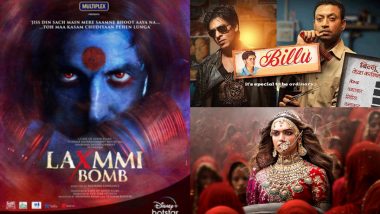 Bollywood and controversies go hand-in-hand. There have been many incidences in the past where a particular scene from a movie has been considered ill or a flick's title has been altered after it received flak online or from some political party. The latest film to fall under this category is Akshay Kumar and Kiara Advani's Laxxmi Bomb whose title is now changed to Laxmii. This decision by the makers has come right after they've received a legal notice from Shri Rajput Karni Sena claiming that the title Laxxmi Bomb was “derogatory” and “offensive” to Goddess Laxmi by the Hindu community. Laxmii Bomb Is Now Laxmii! Akshay Kumar's Film Changes Title Over Outrage Days Before Its November 9 Release.

Just in case, you are wondering that this is happening for the first time, then the answer is no. As earlier, many Bollywood films underwent title change before its release. And so, today, we have rounded up some of the prominent Hindi films where the makers opted for a revamp in their movie's title due to some or the other issue.Laxmmi Bomb: Anger Towards Akshay Kumar’s Film Makes Trolls Attack This Unrelated Indie Flick’s Google Score.

Billu helmed by Priyadarshan starring Shah Rukh Khan and Irrfan Khan was loved by audiences and critics alike for its simplicity. However, before the release, the movie's name was changed to Billu from Billu Barber, as the association of hairstylists were miffed with the usage of the word barber.

Kangana Ranaut's film also faced a title change when Indian Psychiatric Society urged the Censor Board to revamp the movie's name as it sounded offensive to people suffering from mental illness.

John Abraham's thriller film was earlier titled as Jaffna, a place located in Sri Lanka. But later, the makers had to change the name of the film as many people claimed that the name puts Lanka in bad a spot. The movie was based on the assassination of former Prime Minister Rajiv Gandhi.

Shahid Kapoor and Sonakshi Sinha's action film also faced a title change. The reason behind the same that the makers of Hollywood series Rambo had the copyright and so filmmaker Prabhudeva had to go from Rambo to R... Rajkumar.

This Sanjay Leela Bhansali's magnum opus grabbed the maximum headlines when a fringe group protested against it for almost everything and termed it objectionable. From songs, costumes to a few representations, Shri Rajput Karni Sena was not happy the way the culture was depicted in the movie. This Deepika Padukone, Ranveer Singh, Shahid Kapoor starrer was initially titled as Padmavati (name of the Rajput queen), but later was changed to Padmaavat.

These are top five names of Bollywood films which went under title change before it hit the theatres. However, there are many more movies like Loveyatri, Total Siyappa, Haseena Parkar and etc which were also embroiled into controversies and finally had to change their movie name. Stay tuned!

(The above story first appeared on LatestLY on Oct 29, 2020 05:27 PM IST. For more news and updates on politics, world, sports, entertainment and lifestyle, log on to our website latestly.com).