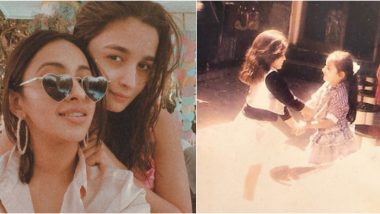 Alia Bhatt recently took to Instagram to share a post wishing her BFF Akansha Ranjan Kapoor and we have to say it is one of the cutest post you will see today. The pandemic has made everyone to take a trip down memory lane and dig out those old pictures to relive the fun times. Well, Alia did exactly that as she took to Instagram to wish her BFF with an adorable picture from their childhood. The actress in the snap is seen playing around with her bestie and both of them look damn cute. Riddhima Kapoor Birthday: Alia Bhatt and Ranbir Kapoor Dance Together in a Cute Surprise Video; Kareena Kapoor Khan, Karisma Kapoor Attend the Bash (View Pics).

Sharing the childhood picture, Alia wrote, "happy birthday my life." The adorable picture received a lot of warm comments from her fans who couldn't stop saying 'aww' looking at Alia's childhood snap. In the picture, Akansha's sister Anushka Ranjan can also be seen in the background and she even took to Instagram to leave a funny comment on Alia's post as she said, "Looks like I’m very jealous of the fun you’ll are having."Alia Bhatt's Muggle Message Will Definitely Make Harry Potter Proud, We Don't Know About Haters Though.

On the work front, Alia recently had the release of her film Sadak 2 directly on OTT given that theatres have remained shut amid coronavirus outbreak. Once the pandemic situation gets better, Alia will get to the shooting of her upcoming film with Sanjay Leela Bhansali titled, Gangubai Kathiawadi.

(The above story first appeared on LatestLY on Sep 18, 2020 06:16 PM IST. For more news and updates on politics, world, sports, entertainment and lifestyle, log on to our website latestly.com).