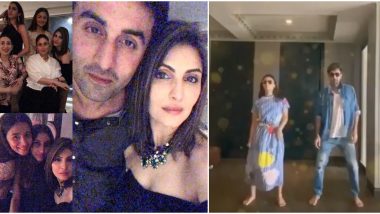 Ranbir Kapoor's sister Riddhima Kapoor Sahni celebrates her birthday on September 15 and as she turned a year older, she ringed her birthday with a big bash. Riddhima was seen having a fun celebration in the company of her family and friends as she took to Instagram to share a picture from the fun bash. To ring in her 40th birthday, the Kapoor fam had also got together for a special video to wish her where Neetu Kapoor, Ranbir, Alia Bhatt, Armaan Jain, Aadar Jain and others were seen dancing. At the birthday bash, Alia Bhatt, Kareena Kapoor Khan, Karisma Kapoor were also seen posing with the birthday girl. Rishi Kapoor Birth Anniversary: Riddhima Kapoor Sahni Remembers Late Father In A Moving Post, Says 'I Miss You Each Day & Will Always Love You'.

Taking to Instagram, Riddhima shared the video and pictures. Sharing the video where Ranbir and Alia danced together, Riddhima wrote, "Best birthday surprise! Fab u guys Thank you everyone." As for the birthday pictures, Riddhima shared a collage where she is seen posing with Alia, Ranbir, Kareena, Karisma and mother Neetu Kapoor. It looked like it was one fun celebration and we bet these pictures and videos are also going to get Ranbir and Alia fans crazy. Raksha Bandhan 2020: Neetu Kapoor Shares Ranbir Kapoor and Riddhima Sahni's Pictures Depicting the Siblings’ Sweet-Sour Relationship!

It looks like it was one fun celebration and as all those close to Riddhima came together to wish her. Many of the other close family members and friends were also a part of the birthday surprise video which seemed great given that due to COVID-19 concerns, not everyone could make it to the bash.

(The above story first appeared on LatestLY on Sep 15, 2020 09:24 AM IST. For more news and updates on politics, world, sports, entertainment and lifestyle, log on to our website latestly.com).