Anushka Sharma's Birthday Present is for Animals, Actress is Building an Animal Shelter 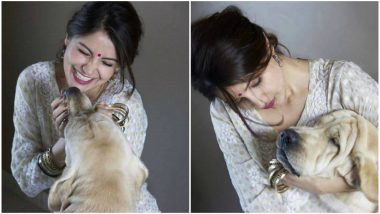 She put a heartfelt not out on the micro-blogging site which starts with how blessed we as are humans because we have a voice and express our grievances. She calls it our responsibility to address and pay heed to the treatment meted out to the strays. She has even quoted His Holiness the Dalai Lama to express her point. She writes, "His Holiness had said, ‘Life is as dear to a mute creature as it is to a man. Just as one wants happiness and fears pain, just as one wants to live and not die, so do other creatures.’ Birthday Gal Anushka Sharma Posts Most Special and Beautiful Photo Ever With Hubby Virat Kohli -View Pic!

Take a look at Anushka Sharma's announcement of her animal shelter:

We are totally loving the actress's efforts and the way she has finally made something of her calling towards loving the animals. We are sure with this move, she has not just won the hearts of her fans but also the animal lovers all over. The actress is a pet parent and has even turned into a vegetarian following her love for animals. This idea to build an animal shelter benefiting those neglected ones gives an idea how much she loves them. On her professional front, the actress will next be seen in the film Sui Dhaaga, opposite Varun Dhawan and Shah Rukh Khan-starrer Zero.

(The above story first appeared on LatestLY on May 01, 2018 01:21 PM IST. For more news and updates on politics, world, sports, entertainment and lifestyle, log on to our website latestly.com).