Did you know there is a connection between Shah Rukh Khan and our birthday boy Arvind Swamy? All thanks to Manu Ratnam's Dil Se. Swamy dubbed for SRK in the Tamil version of the film which also starred Manisha Koirala. 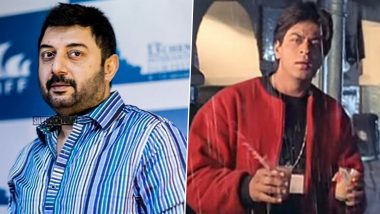 Today is Arvind Swamy's birthday. Since Roja, we have been in love with this man. There's something uniquely charming about him who defied all stereotypical notions of a Bollywood hero. We were charmed by him in Bombay and even loved him in the lesser-known Hindi film of his Saat Rang Ke Sapne. Swamy has a very likable on-screen presence so when we watched him in the dubbed version of Dhurva, we were a bit surprised, happily so. He was deliciously evil. But what many may not be aware of is that Swamy has dubbed for several actors including Shah Rukh Khan. Arvind Swamy To Play Antagonist In Prabhas’ Next With Nag Ashwin?

Swamy, a Mani Ratnam favourite, dubbed for Shah Rukh Khan in the Tamil version of the film called Uriye. Dil Se was essentially filmed in Hindi and later dubbed in a few other languages.

Check out this clip from Uriye

Swamy and Mani Ratnam go a long way. He debuted with Ratnam's Thalapathy. Dil Se is the third part of his trilogy after Roja and Bombay. It addressed the insurgency problem prevalent in Assam at that time. Do you think Swamy's voice matches SRK's in the clip above?

(The above story first appeared on LatestLY on Jun 30, 2021 08:10 AM IST. For more news and updates on politics, world, sports, entertainment and lifestyle, log on to our website latestly.com).