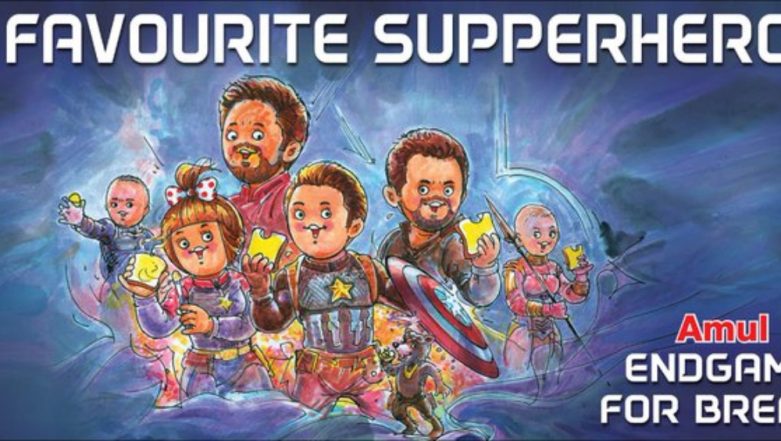 The world has caught the Avengers: Endgame fever. The movie has done records-shattering business all over the world as it had a $1.2 billion opening weekend. And that is nothing compared to the amount of love that is coming its way from the fans. The latest one to fanboy all over the superhero movie is the brand, Amul. The butter-manufacturing brand promotes its product through topical hoardings and ads all over the country. This time around they picked Avengers: Endgame as their subject. Clever, we say. In the ad, we see many main superheroes enjoying bread and butter. The header reads, "Favourite Supperhero". Great pun, alert! Avengers: Endgame Inspires PIB Tweet on Appeal to People to Vote This Lok Sabha Elections 2019.

The tagline for this topical is 'Endgame for Bread'. On the ad, we see cute versions of Captain America, Rocket Raccoon, Okoye, and also Iron Man. In the past, Durex has promoted its products by cashing in on Avengers: Endgame frenzy.

Avengers: Endgame is the culmination of 11 years long storyline by MCU. The movie is a direct sequel to Avengers: Infinity War. In the film, the band of superheroes reunites to fight Thanos for the one last time. They also try to bring everyone who was wiped off from existence in Infinity War back from the dead.