Ayushmann Khurrana’s career graph would be a case study for every aspiring actor. And why shouldn’t it be? Going by the present state of affairs in the industry, not many can boast of six consecutive hits a la Ayushmann. 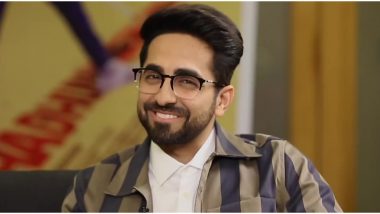 Ayushmann Khurrana’s career graph would be a case study for every aspiring actor. And why shouldn’t it be? Going by the present state of affairs in the industry, not many can boast of six consecutive hits a la Ayushmann. He is, without a shred of doubt, one of the most saleable actors today. It won’t be wrong to call him the ultimate box office charmer who can even make an underwhelming film mint money (hint: Dream Girl). DRAG-alicious! Ayushmann Khurrana to Salman Khan, Bollywood Actors Who Cross-Dressed on Screen.

Let's take you through his films' box office journey to tell you why Ayushmann has the proverbial Midas touch, making big money with medium-budget films.

Starting with his latest hit Dream Girl, the film has, as of now, earned Rs 66.15 crore since its release. If reports are to be believed, Rs 30 crore is its cost of production. That means within its first week, the film has not only recovered its investment but made profits too. In a cash-strapped, flop-infested industry like Bollywood needs such sure-fire hits to stay afloat. Will it score Rs 100 crore? That's something only time can tell. Dream Girl Box Office Collection Day 6: Ayushmann Khurrana and Nushrat Bharucha Starrer Inches Closer To Rs 70 Crore Club.

Ayushmann Khurrana also understands that doing films with topics of social awareness – like Vicky Donor and Badhaai Ho – and ample dose of humour can stereotype him. So, he picked a severe and thought-provoking movie. Article 15 is one such film where the actor shed his mischievous small-town demeanour for a more restrained act. The result? The film grossed Rs 65.45 crore from a humble budget of Rs 30 crore.

How can our old parents get pregnant? Ayushmann’s Badhaai Ho deftly dealt with the oft unspoken topic of old age and sex. It’s a beautiful film on the subject nobody talks about. Who better than Ayushmann to do justice to the storyline? Again, he proved why he’s here to stay by helping a Rs 29 crore film mint Rs 137.61 crore. You can do the math there!!!

Andhadhun was a good breather from the Ayushmann brand of movies (light-hearted, comic, socially-relevant cinema). An actor needs to keep doing things differently or else fatigue sets in. With Andhadhun, Ayushman did just that. He played a blind piano player with secrets. The audience loved this welcome departure from his usual brand of movies. The film worked like a charm, raking in Rs 74.59 crore from its initial budget of Rs 32 crore.

Ayushmann has figured out his space in the industry. He ventures into domains other actors wouldn’t dare to. A lead actor in a film talking about erectile dysfunction -- where's the machismo in that? Shubh Mangal Saavdhaan was one such movie that spoke about a genuine problem that's often swept under the rug. Given the light-hearted way that the matter was presented, the audience loved it. It even started conversations around the otherwise hush-hush topic of male impotence. Needless to say, it made a lot of money which amounted to Rs 43.11 crore. Mind you it's made at a budget of Rs 25 crore.

This film had a lot of things working in its favour. It had the combined might of Rajkummar Rao and Ayushmann, some excellent music, a stellar support cast, hilarious punchlines and much more. It only helped that this Rs 21 crore movie made a decent Rs 34.55 crore. But most importantly, it had the Ayushmann factor.

So moral of the story is, give Ayushmann a Rs 20-30 crore film and he will make a superhit out of it.

(The above story first appeared on LatestLY on Sep 20, 2019 08:14 PM IST. For more news and updates on politics, world, sports, entertainment and lifestyle, log on to our website latestly.com).