Bell Bottom: Vaani Kapoor Confirmed to Star Opposite Akshay Kumar in His Next Espionage Thriller 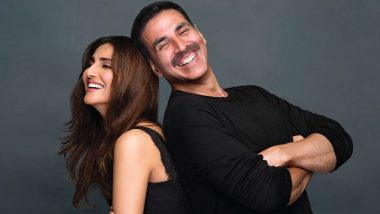 This is a big development. Befikre actress Vaani Kapoor has been roped in to star opposite Akshay Kumar in his next espionage thriller, Bell Bottom. While the announcement with the actor was done long back, the makers were still hunting for the right face as the firm's lead actress. The project would mark Vaani's first collaboration with Khiladi Kumar and the duo is expected to start shooting when things return to normalcy. While her last release War was a big hit at the box office, Bell Bottom can be predicted to mint in good numbers. Akshay Kumar’s Early Morning Zoom Meeting with Bell Bottom Team is Proof Enough of Actor’s Passion for the Project (View Pic).

Sharing her excitement about working with Akshay Kumar, Vaani in her new interaction with IANS said, "I am elated to share the screen space with Akshay sir. I am also thrilled to partner with the whole team who have already made me feel at home at this initial stage of our film. Hoping that this excitement will translate beautifully on screen." Directed by Ranjit M. Tewari, the movie is set in the 1980s and will revolve around India's forgotten heroes.

Jackky Bhagnani who's backing the movie under his home banner is thrilled to have Vaani as a part of his team. "Vaani is an intelligent and effective actor and I have loved all her performances. The female lead in Bellbottom has to be in sync with Akshay sir's screen persona. The role is meaty and I am confident that Vaani will ace this one," he said in his new interaction. Bell Bottom: Legal Case to be Filed Against Akshay Kumar's Film by Kannada Director Ravi Varma?

Bell Bottom was earlier scheduled to release on Republic Day 2021. However, Akshay Kumar decided to push the release of Bachchan Pandey to the same date and hence, Bell Bottom got shifted to April 2, 2021. But going by the current scenario, there are chances that it may not release on the announced date and the makers will start analysing a new release slot instead.

(The above story first appeared on LatestLY on Jul 02, 2020 10:17 AM IST. For more news and updates on politics, world, sports, entertainment and lifestyle, log on to our website latestly.com).