Bhai Dooj 2021: Iqbal, Dil Dhadakne Do, Josh – 5 Films That Celebrate The Bond Between Brother And Sister!

Bhai Dooj aka Bhaubeej is an auspicious Hindu festival that is celebrate during Diwali. On the occasion of Bhai Dooj, let’s take a look at the five films that a brother and sister can watch together. 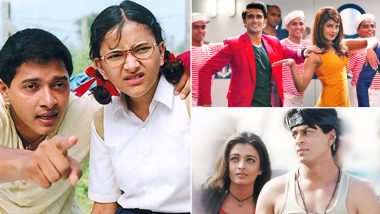 Bhai Dooj aka Bhaubeej is an auspicious Hindu festival that is celebrate during Diwali. The festival is similar to Raksha Bandhan. On this day, sisters gift something special to their brothers. Special pujas are performed and the ceremony symbolises a brother’s responsibly to protect his sister. Bhai Dooj is celebrated across the country with great fervour. Vishwakarma Puja 2021 Wishes: Celebrate Vishwakarma Jayanti During Diwali With HD Wallpapers, Images, SMS, Greetings and Facebook Messages.

Dil Dhadakne Do – Ranveer Singh (Kabir Mehra) and Priyanka Chopra (Ayesha Mehra Sangha) play the role of siblings in the film. Although the family faces several issues, these two share a great and don’t let any issue affect their bond.

Hum Saath Saath Hain – When it comes to family relationships and bonding, filmmaker Sooraj Barjatya has given some of the best films. In this film, you’ll see how the brothers played by Salman Khan, Mohnish Behl and Saif Ali Khan come together to protect their sister (Neelam Kothari) when she’s in trouble.

Josh –Movie buffs were in for a treat when Shah Rukh Khan and Aishwarya Rai Bachchan essayed the role of brother and sister duo. This was the first time they were seen as siblings. The film shows SRK as an extremely protective brother.

Iqbal – Shreyas Talpade, who plays the titular role, is seen as a deaf and mute lad, who wishes to play for the Indian cricket team. And it is his sister Khadija (Shweta Prasad) who encourages him and promises him to fulfil his dream.

My Brother… Nikhil – It is a heart-wrenching story of a brother (Sanjay Suri) and sister (Juhi Chawla) in which the latter tries her best to help her brother, who is an HIV positive, to help him set free from the unfair laws.

These are some of the films that brothers and sisters can watch on the occasion of Bhai Dooj.

(The above story first appeared on LatestLY on Nov 06, 2021 08:10 AM IST. For more news and updates on politics, world, sports, entertainment and lifestyle, log on to our website latestly.com).