Chanda Mama Door Ke: Sushant Singh Rajput’s 2017 Announced Space Film to Be Revived as a Tribute to the Actor

Sanjay Puran Singh has said that he will be reviving the film as a tribute to Sushant Singh Rajput. He revealed that he is working on the script and will make the film in the coming times. 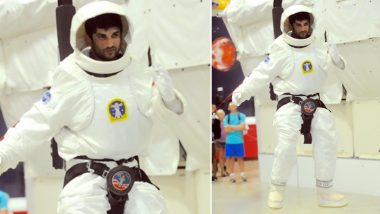 Sushant Singh Rajput's passion for outer space is known to all his fans. The actor had quite an interest in astrophysics, studying about the galaxies and whatnot. This love for astronomy even made him venture into a movie around the same topic. The film titled Chanda Mama Door Ke was a passionate 2017 project that Sushant Singh was supposed to be a part of. Nonetheless, the actor could not give his dates to the project due to his busy schedule and the buzz around the film slowly died, disappointing his fans to have missed a chance to see Rajput as an astronaut. Sushant Singh Rajput to Turn Director with a Story Similar to Chanda Mama Door Ke?

The film is, however, headlining the news again as the film's director Sanjay Puran Singh has said that he will be reviving the film as a tribute to Sushant Singh Rajput. He revealed that he is working on the script and will make the film in the coming times. Talking to Midday, Singh revealed that the film is not shelved and he hopes that he will be able to translate his vision on the screen. "I hope I will be able to translate on screen I have visualised in my head and put on paper," he said. He added that he will not be reviving the film right away as 'it has not been even a year to Sushant’s passing'.

He said that Sushant's demise has been emotionally exhausting for him and since the actor was so passionate about the project, he will make the film as a tribute for him.“Whenever I make the film, it will be a tribute to Sushant. He was so attached to the script that I owe this to him. He had given a lot of inputs to the material,” told Sanjay. Sushant was reportedly co-producing the space film as his first production film as well. Whoa! Sushant Singh Rajput Is a Proud Owner of a Land on the MOON.

Back in 2017, Sushant had also visited NASA to train and prep for the movie. Sushant, who was highly interested in everything science had also bought land on the moon, in a region called the Mare Muscoviense, or the "Sea of Muscovy". The property he bought is located on the blindside which is known as "dark side of the moon".

Talking about Chanda Mama Door Ke, Nawazuddin Siddiqui and R Madhavan were also signed for the film in 2017. But now as Sanjay Puran Singh is planning to rework the script of the film, it remains to be seen if the two will still feature in it. Meanwhile, Sanjay also added that it will be difficult for him to find a replacement to step into the shoes of Sushant's character.

(The above story first appeared on LatestLY on Jan 09, 2021 10:41 AM IST. For more news and updates on politics, world, sports, entertainment and lifestyle, log on to our website latestly.com).