Coolie No 1 Star Varun Dhawan Opens Up on Being a Hero of the Masses!

GenNow Bollywood star Varun Dhawan never fails to impress his fan base. The actor says the reaction of the common man is most important for him, and that he only works for the masses. Check it out. 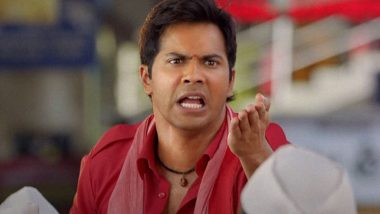 GenNow Bollywood star Varun Dhawan never fails to impress his fan base. The actor says the reaction of the common man is most important for him, and that he only works for the masses. Ever since his debut in 2012, Varun has entertained with his dance skills and youthful glamour in films such as Judwaa 2, ABCD 2, Street Dancer 3D, Humpty Ki Dulhania, Badrinath Ki Dulhania, Student Of The Year and Main Tera Hero. He has also shown impressive acting chops in Badlapur, October and Sui Dhaaga. Coolie No 1 Song Mirchi Lagi Toh: Sara Ali Khan and Varun Dhawan's Dance Number Is Cool but Lacks That Dinchaak Vibe (Watch Video).

From his career graph so far, it would seem like Varun's ambition is to be a mass hero. "Yes. Obviously, I do enjoy mass films a lot. I think I have a blast when I do them. It's difficult to do and it is larger than life, and you need to have immense conviction while doing them. I enjoy it. For me, making a film is about trying to please everyone but obviously, the kind of reaction that you get from the common man is the most important thing," Varun told IANS. Coolie No 1 Movie Review: Varun Dhawan and Sara Ali Khan’s Comedy Is Exactly What 2020 Felt Like… Terrible! (LatestLY Exclusive).

While the masses comprise his target audience, Varun's latest film "Coolie No. 1" released on a digital platform. "My house is in Juhu. I have grown up pretty much opposite Juhu beach. So, that is my audience. I can be fake and try and be cool now because my film is on OTT. But that (the masses) is my audience and that is who I work for. Anyone who says, 'oh you are uncool because you are doing a massy film', (my reaction would be) 'Okay, I am uncool and I don't care'," he added.

(The above story first appeared on LatestLY on Jan 01, 2021 02:18 PM IST. For more news and updates on politics, world, sports, entertainment and lifestyle, log on to our website latestly.com).