Dhamaka: Did You Know Kartik Aaryan's Film Is an Official Remake of Korean Thriller The Terror Live?

Dhamaka revolves around Kartik as Arjun who's a news anchor caught up between TRPs and terror attacks in the city. The film is set to premiere on Netflix on November 19. 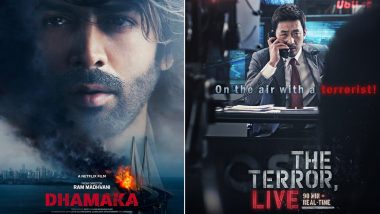 Kartik Aaryan-starrer Dhamaka's trailer was released by the makers today (October 19). Since then, the actor has been trending big time on Twitter as fans are impressed with his phenomenal acting prowess. Helmed by Ram Madhvani, the thriller sees Aaryan essaying the role of a journalist named Arjun Pathak, who covers the live broadcast of a terror attack in Mumbai. While the trailer of the film is making headlines, did you know that Dhamaka is not an original story but is an official remake of a Korean movie titled The Terror Live (2013)? Yes, you read that right! Dhamaka Trailer: Kartik Aaryan is Explosive as News Anchor Arjun Pathak Dealing With an Intense Terrorism Crisis (Watch Video).

While in The Terror Live we get to see the lead actor Ha Jung-woo (as Yoon Young-hwa) amid a live broadcast of a terrorist attack following the explosion of Mapo Bridge, whereas in Dhamaka, the bridge is replaced with Mumbai's famous Bandra Worli sea link. Even the trailer of Dhamaka in bits and parts is very much inspired by the Korean film. FYI, the Korean drama was one of the biggest hits ever and had minted more than $38 million at the box office. Dhamaka: Kartik Aaryan’s Thriller Sold to Streaming Giant Netflix for a Whopping Rs 135 Crore – Reports.

To note, with The Terror Live being a super hit movie, there are a lot of expectations attached to Kartik Aaryan's Hindi film Dhamaka too. Apart from Aaryan, the film also stars Mrunal Thakur, Amruta Subhash, Vikas Kumar, and Vishwajeet Pradhan in significant roles. Earlier slated for a theatrical release, Dhamaka will stream on Netflix from November 19. Excited? Tell us your views in the comment section below. Stay tuned!

(The above story first appeared on LatestLY on Oct 19, 2021 03:54 PM IST. For more news and updates on politics, world, sports, entertainment and lifestyle, log on to our website latestly.com).