Reportedly, Kartik Aaryan-starrer Dhamaka's rights have been acquired by Netflix for a whopping amount. The cherry on the cake is that it's the biggest ever Hindi film purchase for an OTT platform. Read on. 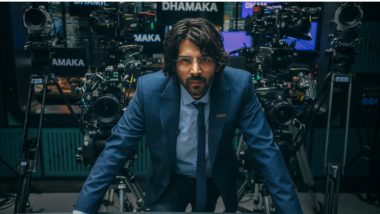 Due to the pandemic, there is a shift in how people are consuming entertainment. Earlier, theatres were the ultimate source to watch a film, but now, OTT platforms are the LIT thing. Everything is slowly and steadily going digital. Talking on the same lines, many Bollywood movies are also going the online way. Now, the latest we hear is that Kartik Aaryan-starrer Dhamaka's rights have been acquired by Netflix for a whopping amount. The cherry on the cake is that it's the biggest ever Hindi film purchase for an OTT platform. Yus, you read that right. Dhamaka Teaser: Kartik Aaryan Is All Set To Reveal The Truth, Movie To Release On Netflix (Watch Video).

According to a report on Spotboye, Kartik's film Dhamaka has been sold for Rs 135 crore to Netflix. The report further also mentions that with this Dhamaka has surpassed Varun Dhawan's Coolie No 1 fee wherein the film was bought by Amazon Prime Videos at Rs 90 crore as well as Akshay Kumar's Laxmii which was sold at Rs 110 crore to Disney Hotstar.

Giving out the reason why the streaming giant spent a huge sum on Kartik's film, a source told the entertainment portal, "It is the gripping start-to-finish 24-hour thriller format and Kartik Aaryan who is the fastest rising star today with a fan following in every age group,"Kartik Aaryan's Next 'Dhamaka' Was Shot In Just 10 Days, We Tell You How! (LatestLY Exclusive).

Earlier, Kartik had talked about his Netflix debut with Dhamaka and said, "Dhamaka has been a very exciting & enriching experience for me as an actor. Working with a maverick like Ram Madhvani has allowed me to explore & showcase a new facet of my personality. I am thrilled that the film will reach audiences & my fans all around the world on Netflix."

For the unaware, Dhamaka is a Hindi remake of the South Korean film titled The Terror Live (2013) where Kartik essays the lead role of a journalist named Arjun Pathak, who covers the live broadcast of terror attack in Mumbai. Stay tuned!

(The above story first appeared on LatestLY on Apr 14, 2021 10:43 AM IST. For more news and updates on politics, world, sports, entertainment and lifestyle, log on to our website latestly.com).