Dilip Kumar Passes Away: From Jwar Bhata to Qila, Know More About the First and Last Film of The Actor

Dilip Kumar left us for heavenly abode today. His contribution to Indian Cinema has been unparalleled. Now we only have his movies to fall back on every time we miss the legend. So we have his first and last roles here as an actor. There's something common about the two. 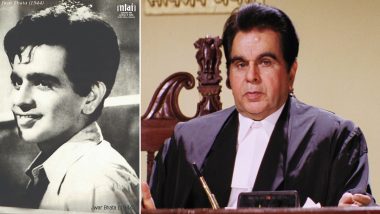 Dilip Kumar left us with a heavy heart. He has been unwell for a while and last night, he passed away at the age of 98. Yusuf Khan was christened Dilip Kumar by Devika Rani, the owner of Bombay Talkies who hired him as an actor.  Yes in those, the Hindi film industry was much more organised and structured. Kumar used to get a monthly salary for acting in movies and his debut movie was Jwar Bhata in 1944. From then on, began his admirable and exciting ride to stardom which ended with Qila that released in 1998. Today, let's learn a bit more about the actor's first and last film. Dilip Kumar Funeral: The Late Actor Cremated With State Honours (View Pics And Videos)

Jwar Bhata was directed by Amiya Chakravarthy. According to reports, Devika Rani and Chakravarthy were location hunting in Nanital when they met Dilip Kuma, then Yusuf. Rani gave him her card and asked him to meet her in Mumbai. He did so and screen-tested for Jwar Bhata. That became his first movie. Apparently, he was paid a salary of Rs 1000 along with allowances.

A rare photograph of Yousuf Sahab ( @TheDilipKumar ) in his debut film " Jwar bhata which was released in 1944 during British Rule in India pic.twitter.com/RHo0eEb6cu

Coming to 1998, Qila is Dilip Kumar's last role in front of the camera. In fact, he had the dual role of estranged brothers in the film. One investigates the murder of the other. He played a judge for the first time in his career in this movie. What's interesting is that the rights of the film are with Shah Rukh Khans Red Chillies Entertainment. You can watch Qila on Netflix. Dilip Kumar No More! Pakistani Actors Imran Abbas, Saba Qamar, Adnan Siddiqui Mourn The Loss Of The Legend Of Indian Cinema

Between these two movies which were both duds at the box office, Dilip Kumar emerged as one of the biggest performers of Indian cinema, someone who inspired millions to follow their passion for acting.

(The above story first appeared on LatestLY on Jul 07, 2021 07:36 PM IST. For more news and updates on politics, world, sports, entertainment and lifestyle, log on to our website latestly.com).