Sunil also said that not only does he wants to introduce himself as an actor but wants to try his hand at singing. 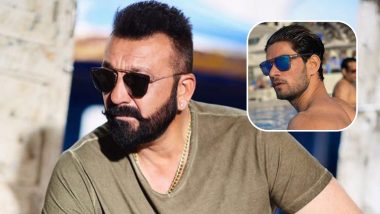 "I always wanted to act but it couldn't happen before. I shifted to Dubai long back and have been working here with many Bollywood and Punjabi stars, with their fitness activities. "It was just three months back, when one of my producer clients from the Punjab film industry explored this talent of mine and gave me the opportunity. Soon I'm travelling to Punjab to start shooting soon. Ajay Devgn Shares Throwback Picture to Wish Sanjay Dutt aka Sanju on His 63rd Birthday!

"I have been a big fan of Punjabi songs and can match the tone of the people easily. The scripts are written in Hindi and I'm continuously practicing it. I'm so excited about it." Revealing how he found inspiration and guidance from Bollywood star Sanjay Dutt, Sunil Sharma said: "I'm a big fan of Sanjay sir. I'm lucky to have trained him while he was in Dubai for his cancer treatments. I'm glad to have received this opportunity to look after his fitness and be with him during that tough time.

"He is such a strong and kind human. After looking at him, I realised my love for acting and thought of giving it a try again. I will say it is all because of him, I'm getting this encouragement from. I wish to feature in a film with him someday."

Sunil also said that not only does he wants to introduce himself as an actor but wants to try his hand at singing. "If the audience accepts my acting, I wish to sing romantic songs too which will for sure be a treat for people in love and the one who are looking ahead to fall in love. "I'm also looking forward to giving it a try to sing soon if things fall in my favour," he concludes.

(The above story first appeared on LatestLY on Aug 15, 2022 09:19 PM IST. For more news and updates on politics, world, sports, entertainment and lifestyle, log on to our website latestly.com).