Divya Bharti Birth Anniversary Special: Did You Know The Late Actress Had 12 Back-To-Back Releases In The Year She Debuted In Bollywood?

Divya Bharti's name always makes us wonder what if she was alive today. What if she hadn't taken a fall in 1993? The answer is she would have been the most successful actress in the 90s. Why do we say so? She had 12 releases in 1992, the year she debuted in Bollywood with Vishwatman. 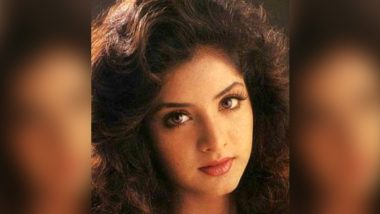 The name Divya Bharti often makes people leave a sigh of loss. The fact that she was lost to the world so young and early still breaks our hearts. But it is important to remember such people by the work they have done. On her birth anniversary today, let us tell you something you may not be aware of. Divya Bharti debuted in Bollywood with multi-starrer Vishwatma in 1992. The same year she had as many as 12 releases including Shah Rukh Khan's big-screen debut Deewana. We doubt if any other actress can make a similar claim of releases per year, such was her popularity. Sanjay Kapoor Shares an Emotional Post Remembering His Kartavya Co-Star Divya Bharti

Bharti had taken the South road to Hindi films. She was so popular down South that it was said she rivaled Vijayshanti's box office prowess. Soon enough Hindi filmmakers queued up to have her in their movies and Vishwatma happened. The other releases of that year were, Dil Ka Kya Kasoor, Shola Aur Shabnam, Deewana, Jaan Se Pyaara, Balwaan, Dushman Zamaana, Dil Hi Toh Hai, Chittemma Mogudu and Dharma Kshetram.

Bharti passed away in April 1993 leaving everyone shocked and harrowed. Sajid Nadiadwala's, the actress was married to him, wife Warda had said during an interview with Bollywood Hungama that they are close to Bharti's families. She even added, "On her anniversaries and birthdays, we speak to each other. When my children watch her movies, they call her ‘Badi Mummy’. So, guys, she is still a very, very beautiful part of our lives."

Divya Bharti was one of the most popular actresses of the 90s whom we lost too early. She was only 19!

(The above story first appeared on LatestLY on Feb 25, 2021 08:20 AM IST. For more news and updates on politics, world, sports, entertainment and lifestyle, log on to our website latestly.com).