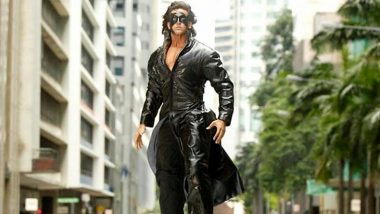 The superhero film Krrish has been one of the most successful franchise starring Hrithik Roshan in the lead role. The fourth installment that is Krrish 4 is one of the most awaited projects of Hrithik. Besides Hrithik, who else would be seen in the fourth installment, it is yet to be announced. From Deepika Padukone to Priyanka Chopra Jonas, some of the popular names are doing rounds for the lead heroine, but the makers haven’t made any official announcement. Krrish 4: Hrithik Roshan’s Superhero Franchise To Get Back Jaadu?

Due to the lockdown imposed in the wake of coronavirus outbreak, shooting of several films and shows had to be suspended, considering the safety of the entire cast and crew. Although with several relaxations being issued at the moment, it is still difficult to do the shooting as the makers can’t achieve the desired result due to the conditions been laid down to do the shooting process. A trade source has revealed to Mid-Day about the heroine who might not make as the lead actress, dropped a hint about the plot and also by when the film could go on floors. Deepika Padukone Says, ‘I Would Want to Collaborate with Hrithik Roshan’; Is She Hinting About Krrish 4?

The source shared that Krrish 4 will see Hrithik Roshan in a dual role and Krrish will try to bring his scientist father, Rohan Mehra, back from the dead. The source was quoted as saying, “Rohit is integral to the story as he is the only person who can contact Jaadu. Rakeshji has designed the script cleverly to incorporate the much loved alien from Koi Mil Gaya (2003). While the cast is yet to be determined, Priyanka Chopra is not expected to reprise her role.” The source also stated that Krrish 4 may go on floors in January 2021. Regarding the development of this sci-fi flick, Rakesh Roshan stated, “We are still working on the script.” Let's wait for an official announcement!

(The above story first appeared on LatestLY on Jul 08, 2020 09:12 AM IST. For more news and updates on politics, world, sports, entertainment and lifestyle, log on to our website latestly.com).