Hungama 2 is a Hindi comedy entertainer that is directed by Priyadarshan. It is the sequel to 2003 film Hungama, and the remake of the Malayalam film, Minnaram. The movie stars Meezan Jafri, Pranitha Subhash, Paresh Rawal, Shilpa Shetty Kundra, Rajpal Yadav, Johnny Lever, Manoj Joshi, Tiku Talsania and Akshaye Khanna. Hungama 2 is streaming on Disney+ Hotstar VIP. 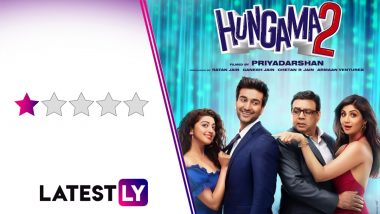 Hungama 2 Movie Review: Hungama 2 is the remake of the 1994 Malayalam film, Minnaram, that is helmed by Priyadarshan who also made the original. The movie stars Meezan Jafri, Pranitha Subhash, Paresh Rawal, Shilpa Shetty Kundra, Rajpal Yadav, Johnny Lever, Manoj Joshi, Tiku Talsania and Ashutosh Rana. Hungama 2 Confirmed As Minnaram Remake; 7 Times Priyadarshan Remade His Own Malayalam Hits and How They Fared at the Box Office!

Hungama 2 is about how Akash Kapoor (Meezan Jafri) sees his life turn topsy-turvy when his past comes knocking on the door of his house. His past is Vaani (Pranitha Subhash), his college sweetheart who left him without any reason and is now back with a toddler who she claims is his. His strict father (Ashutosh Rana), who has arranged for Akash to get engaged to the daughter of his businessman friend Bajaj (Manoj Joshi), is in a lurch. He doesn't know whom to believe - his son who is denying everything, or a woman who has all the proof that the child is his grandkid.

On a separate track, there is Radheshyam Tiwari (Paresh Rawal), Bajaj's lawyer. He is suspicious of his much younger wife Anjali (Shilpa Shetty Kundra), who happens to be Kapoor's close relative. Due to a series of misunderstandings, he thinks Anjali and Akash are having an affair, and she is carrying his child.

For those who don't know this, Priyadarshan and Mohanlal have been best friends even before they came into movies. Priyadarshan has made many memorable entertainers with Mohanlal in the lead, though Minnaram isn't one of their best ones. Yes, Minnaram is still remembered for its comedy scenes, but its emotional subplot that dominated the third act was very weak.

Hungama 2 changes that part, which was a smart move (Lalu Alex's 'polycythaemia vera' dialogue has now become a joke), but keeps most of the premise of the original intact. Even the sets and scenes are almost frame to frame. Also including aspects of a film that would have been excusable in 1994, but not at all in 2021. There is a scene where Akash tries to get Vaani to confess and record it using a tape-recorder! This, in the time of smartphones!

People get slapped left, right and centre. Also, when Minnaram came out, no one would have questioned why the character played by Shilpa Shetty would be in a relationship that is so mentally abusive. Now we do.

Priyadarshan's comic remakes used to be good, even when I have liked the originals better. Be it Hera Pheri, Hulchul, Hungama or even De Dana Dhan, they were pretty funny. Hungama 2, that needlessly shares the title of his 2003 film, is not an out and out comedy like its predecessor, and above all, not even funny at all.

If you have watched Priyadarshan's comedies in Malayalam, not for a moment, do you feel that the humour is loud. But in his every remake in Hindi, comic sequences feel stretched, loud and farcical. People talk and act as if everyone around them are hearing-impaired. Hungama 2 has that problem multi-fold.

I can give an example of comparison here. In the original Minnaram (which itself is inspired from a black and white Malayalam movie Brahmachari), there is a scene where the late Sankaradi, who played the hero's caretaker, rushes to tell Shobana, the heroine, that her daughter has fell from the house. He just exaggerates what really happened, but the way he says it, leaves her worried and makes her rush to the house. Later when she confronts him, he tells her that she didn't allow him to complete the sentence and ran away, thereby passing the blame on to her. Hungama 2: From Hera Pheri to Garam Masala, 7 Best Priyadarshan Comedies in Bollywood, Ranked!

The same scene in Hungama 2 has the veteran Tiku Talsania do all sorts of facial expressions to depict the same conversation, ruining the point of what he is trying to deceive her into misunderstanding. Even the usually dependable Ashutosh Rana is made to ham like anything. Strange part is that despite doing a similar loud act - I was worried about his vocal chords - Meezan (whose uncanny semblance to Ranbir Kapoor's looks and mannerisms are distracting enough) comes blank when it comes to emoting. Pranitha Subhash's performance is restricted to looking pretty and trying to find her place in the hamminess.

I also wonder what made Shilpa Shetty Kundra chose this role and movie as her comeback. Her entire track is very secondary, her character hardly has meat and she only serve as a shtick for Paresh Rawal to do his mildly amusing antics (Jagathy Sreekumar admirers, please don't come here). And yeah, there is also Rajpal Yadav and Johnny Lever (with a dubious Bengali accent that would not sound funny even in the '90s), who come, present their antics, and leave the scene after earning the paycheck for their day's work

Like I mentioned before, Priyadarshan has changed the climax of the original and tried to make it funnier. At least attempt-wise. Fans of Mohanlal would spot a funny scene from Vandanam in there. The point is, I am using the word 'funny' here and there, but Hungama 2 is simply the opposite of that. It is as humorous as a molar tooth extraction.

The original Hungama was the remake of Poochakkoru Mookkuthi, the 1984 film that marked the directorial debut of Priyadarshan and also starred Mohanlal. Forget being on the same league as Hungama, Hungama 2 would be competing with the likes of Muskurahat and Saat Rang Ke Sapne as to being the worst Mohanlal remake that his BFF has copy-pasted for Hindi audience. Even the songs are terrible, including the needlessly inserted "Churake Dil Mera" remake that is there to justify why Shilpa Shetty and her midriff are there in the movie.

- Will Make You Want To Revisit the Original

Hungama 2 is not only a needless extension to a franchise, but also a needless remake, and also a needless exercise in making our ears split with all the noise. The only thing that Hungama 2 does better than Minnaram is that it doesn't kill a dog in a bomb explosion, which the original did. Not because the director has turned a dog-lover, but Priyadarshan had already borrowed that scene in Yeh Teraa Ghar Yeh Meraa Ghar. Hungama 2 is streaming on Disney+ Hotstar VIP.

(The above story first appeared on LatestLY on Jul 23, 2021 11:02 PM IST. For more news and updates on politics, world, sports, entertainment and lifestyle, log on to our website latestly.com).