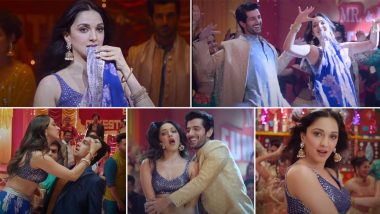 We don't know what Indoo ki Jawani is all about but the makers have certainly adopted a new marketing strategy to keep us intrigued. With no teaser or trailer releasing, the makers have instead released the first song from Kiara Advani's next and yes, it does sound peppy. Hasina Pagal Deewani is the remake of a very popular Mika Singh song, Sawaan Mei Lag Gayi Aag with Asees Kaur joining the singer for a change. Kiara Advani Wraps Up ‘Indoo Ki Jawani’, Celebrates with Aditya Seal and the Entire Team (Watch Video).

Kiara Advani's quirky dance moves will instantly make you groove to this song. The choreographer also adds a new hook step to the song which you may or may not decide to imitate in the future. Kiara dances with Aditya Seal in this quintessential party song that's bound to play in all your upcoming sangeet functions. With a perfect choreography and Kiara's expression to go with, Hasina Pagal Deewani is able to set your mood right. Penned by Shabbir Ahmed and composed by Mika Singh, the remake has the potential to be the new favourite among the listeners. Kiara Advani Feels Happy in the Company of Children, Says ‘I Have a Good Maternal Instinct’.

Check Out the Song

Indoo ki Jawani will see Kiara as a small-town girl from Ghaziabad whose left swipes and right swipes on a dating app result in hilarious chaos. While there have been reports about the film striking a deal with an OTT platform for its direct to web release, the makers haven't confirmed any such development.

(The above story first appeared on LatestLY on Sep 16, 2020 01:40 PM IST. For more news and updates on politics, world, sports, entertainment and lifestyle, log on to our website latestly.com).