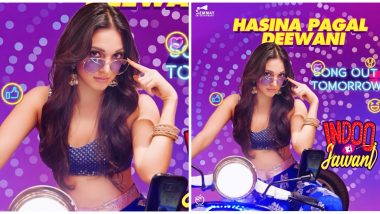 We might get our hands on the first footage from the upcoming comedy, Indoo Ki Jawani tomorrow. The first song from the film is dropping on the internet on Wednesday. Lead actress Kiara Advani made the announcement on social media. She dropped a cool new motion poster along with a tiny audio clip of the song. The caption and the tune tell us that this will be a dance number. We sincerely hope that Bollywood gives us a good dance number. We haven't received a good dance-worthy song during the pandemic. "Beyonse Sharma Jaeygi" and "Tehas Nehas" didn't exactly appeal to the fans. Indoo ki Jawani Promo: Kiara Advani Gets us Excited for September 16 (Watch Video).

Kiara made the announcement about Indoo Ki Jawani a couple of days back. She revealed a few details about her character - a smalltown girl who joins a dating app. The movie also stars Aditya Seal and Mallika Dua in key roles. Bhool Bhulaiyaa 2: Makers To Restructure The Film’s Set Before Resuming Shoot With Kartik Aaryan And Kiara Advani.

Indoo Ki Jawani will be the next film to skip a theatrical release and go straight to digital. With theatres still shut, Gunjan Saxena, Shakuntala Devi, Dil Bechara had to release on streamers. The film industry has appealed the government for restarting the theatres like most of the businesses in India.

(The above story first appeared on LatestLY on Sep 15, 2020 11:42 PM IST. For more news and updates on politics, world, sports, entertainment and lifestyle, log on to our website latestly.com).